Arsenal manager says he hasn't been fair to Nketiah. 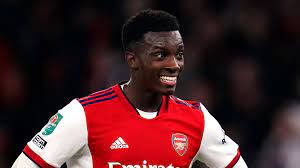 Mikel Arteta, Arsenal manager, believes he has not been "fair" to Eddie Nketiah after the youth striker scored twice in a rare start to surprise Chelsea.

In only his second Premier League appearance of the season, the 22-year-old, who is out of contract this summer, delivered two superb finishes at Stamford Bridge.

In an interview earlier this week, he expressed dissatisfaction with his lack of playing time and expressed doubts about his future.

Arteta told BBC Sport, "I should have been playing him more."

The Gunners have been in contact with Nketiah regarding a new contract, but the striker has stated that he needs assurances about regular first-team action before agreeing to a new term.

"There have been negotiations and offers of a new contract," he said on The Beautiful Game podcast. "But right now, my goal is to play football and play frequently."

"That's my dream and what I aspire to achieve, but I'm also at Arsenal, and I adore Arsenal."

This season, the former England Under-21 forward has only made seven starts, with his first in the Premier League coming against Southampton on Saturday.

He was behind Pierre-Emerick Aubameyang and Alexandre Lacazette before the former's January move to Barcelona and the Frenchman's absence due to Covid.

His double against Chelsea occurred a year and two days after his last Premier League goal, which he scored in a 1-1 draw with Fulham.

"What Eddie has done tonight is the result of what he has been doing for the last ten months and no one has noticed," Arteta continued.

"We've also had to deal with other concerns, which hasn't been simple." But what happened to him tonight was all his fault."