Fiction - The Village That Is Thirsty 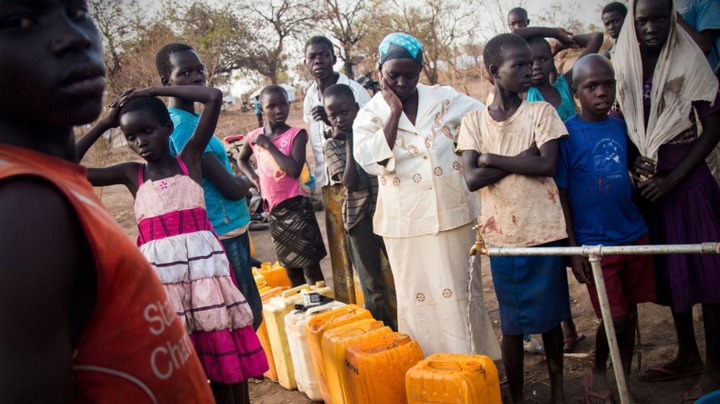 Once upon a time, there was a village where water was scarce. It hadn't rained in months, and the earth was so parched that drilling boreholes would yield no results.

The residents of this village had been forced to drink water from a filthy stream ten miles away, which their goats and sheep still drank. The food the women prepared was contaminated with bacteria, and the children were afflicted with a variety of illnesses.

The inhabitants of this wretched village were in desperate need of help until one afternoon, an angel (whose name was NOT Obinim) appeared out of nowhere, landed with a resounding fanfare in the village square, and drew quite a crowd.

“Greetings, thirsty villagers,” says the narrator. In his most heavenly bellow, the celestial being inquired, "Who among you has the largest water tank?"

A young boy replied, "The Koomsons." “They live behind the school,” says the narrator.

“The Otabils, too, have a large tank. Another faceless voice from the crowd said, "They live near the church."

As a result, the angel embarked on a journey to see the two large-tanked families. He went to the Koomsons first, where he took one look at their Rambo 700 Polytank, prayed a little, and the tank was immediately filled to the brim with fine, pure, clean, new (even slightly chilled) water. He then returned to the Otabils and performed the same miracle. The Angel vanished after that.

There was joy and jubilation in the Koomson household. Mr. Koomson was giddy with joy and kept shouting, "Thank you God!" every ten seconds. “Should we call the villagers to come with their buckets?” Mrs Koomson asked her husband. ”

It was as if a nuclear bomb had exploded in Mr Koomson's chest. Oh, my goodness! Oh, mansah! Have you completely lost your mind? Let me be sure about everything. You only have one choice here. You can leave with them if you call the villagers to come here for water.” Mrs Koomson, understandably, got the message and stopped talking about her grand plans for liquid charity.

There was joy and jubilation in the Otabil household. In their entire lives, they had never seen so much water. They both ran out into the streets, screaming at the top of their lungs, “We have water!” Please come and fill your buckets.” As you would expect, a line developed quickly, and within two days, there was not a drop of water left in the Otabil building.

The Angel returned to town the next day. He found that there was no water at the Otabil home. “Well, it appears that I did not provide you with enough, did I?” He prayed once more, and not only was the Otabil's tank filled with water, but two more equal-sized tanks appeared out of nowhere, both full to the brim with the wet stuff.

He then went to the Koomson home. Because they had been the only ones drawing from it, their water tank was still fairly full. “I suppose you still have more than enough. That's all right. “Goodbye.”

Every few days, the angel would return and repeat the process. At the Otabils', he would add more tanks and water, while at the Koomsons', he would note how much water they still had and leave them to it. Soon, the Otabils were supplying clean water to the entire district. They never ran out of water again, and many people were blessed as a result of their generosity.