The Phobians will host Gold Stars at the Accra Sports Stadium in a GPL Matchday 29 encounter as they continue with the defence of the title they won last season.

Ahead of the game in the capital, Hearts of Oak has made notice of the rates to be charged at the gates before entry. 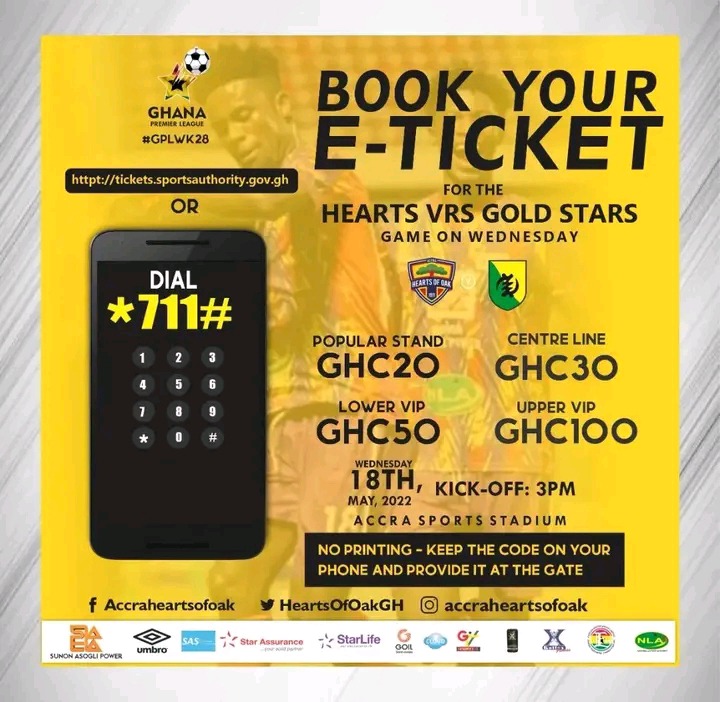 A release published on their media channels on Tuesday said, a ticket for a seat at the Upper VIP Stand of the stadium will cost GHc100 as Hearts go in search of the double over the league debutants.

A rate of GHc50 will be charged for a seat at the Lower VIP Stand with the Phobians needing the win to rise up the table from their current fourth position.

The Centre Line tickets will sell at GHc30 as Hearts of Oak expect a huge turnout at the stadium by their fans as they aim for the three points.

A flat rate of GHc20 will be charged for a seat at the Popular Stand of the stadium in an encounter crucial to the Phobians as they still harbour hopes of retaining the title they won last season.

Fans hoping to be at the Accra Sports Stadium to watch the game, can dail the shortcode *711# on all networks and follow the process to get a ticket.

With six matches to end the GPL campaign, Hearts of Oak trail leaders Asante Kotoko by 12 points but, have not given up hopes of winning the title for a second successive season.