After each of the nine matches played in the betPawa Premier League Matchday Three fixtures last weekend, a player was selected as the Most Valuable Player, (MVP).

In the biggest game of the weekend played between Asante Kotoko and Hearts of Oak at the Baba Yara Stadium in Kumasi, Yussif Mubarik, won the MVP award as his goal, helped secure a point for the Porcupines.

Dominic Nsobila of Accra Lions, took the award in their home game with Tamale City FC at the Accra Sports Stadium.

Former Ghana international Emmanuel Agyeman Badu, took home the honour after being named the MVP as his Accra Great Olympics side defeated King Faisal Babes at the Accra Sports Stadium. 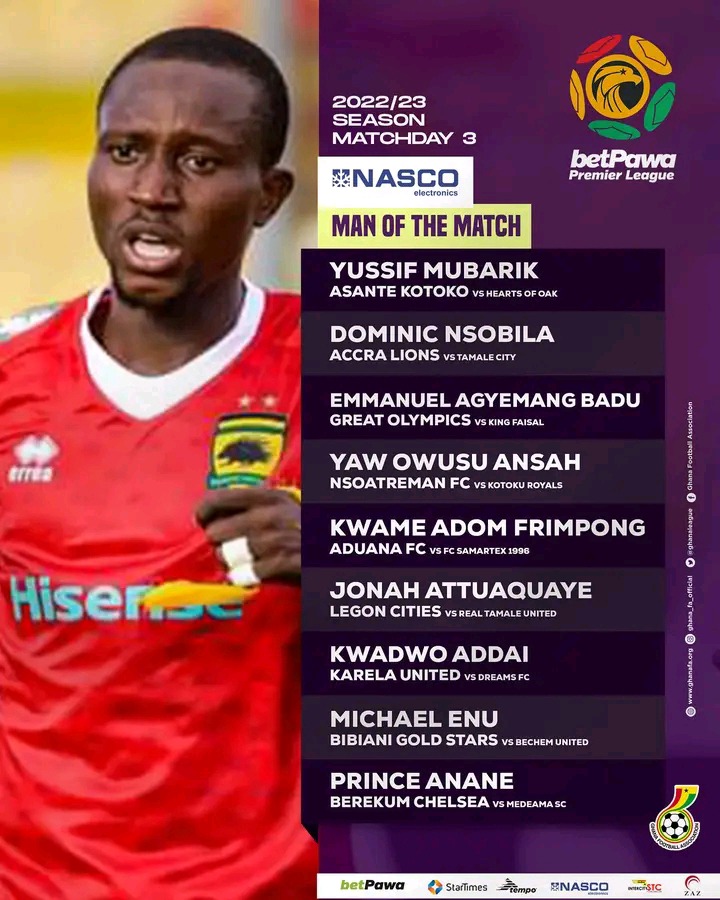 Yaw Owusu Ansah of Nsoatreman FC, was adjudged the MVP as his side drew goalless with Kotoku Royals at the Cape Coast Stadium.

Midfielder, Kwame Adom Frimpong of Aduana FC, came out tops in their game with FC Samartex 1996 at the NAB I Park, Dormaa-Ahenkro.

Jonah Attuquaye of Legon Cities, won the award as they defeated RTU 1-0 at the Aliu Mahama Sports Stadium in Tamale.

Kwadwo Addai of Karela United, was MVP in their home win over Dreams FC at the CAM Park, Anyinase.

Michael Enu of Bibiani Gold Stars picked up the award as they defeated Bechem United 1-0 at the Dun's Park, Bibiani with Prince Anane the winner in the game between Berekum Chelsea and Medeama SC at the NAB I Park, Dormaa-Ahenkro.