Man City beat Chelsea at the Etihad to open up a 13-point lead at the top. Kevin De Bruyne's dazzling solo effort was enough to secure a potentially title-winning three points. 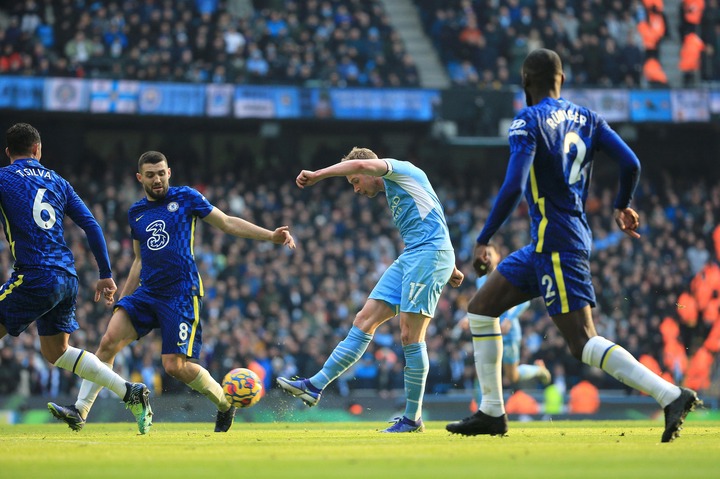 Man City have averaged at least three goals at the Etihad in the Premier League despite playing without a designated striker for much of the season, and with Chelsea having only kept two clean sheets in 11 league matches, goals were expected.

In a chess match-like first half, however, clear-cut chances were few and far between.

Mateo Kovai's errant ball put Jack Grealish through on goal one-on-one with Kepa Arrizabalaga five minutes before halftime, providing the game's finest opportunity for either side in a cagey first period.

However, the Englishman, who was part of a fluid front three, was unable to capitalise, as the onrushing Spaniard turned his placed finish around the post for a corner.

Pep Guardiola has lost eight games as a manager against Chelsea, the most of any manager.

But his relentless crop took the lead on 69 minutes after a marauding run through the heart of the Blues' defense by City captain De Bruyne, who sumptuously bent a right-footed effort past Arrizabalaga into the bottom corner.

With substitutes Callum Hudson-Odoi and Timo Werner stationed opposite a hitherto isolated Romelu Lukaku, it was a goal that ignited the touch paper as the game loosened up.

However, Thomas Tuchel's substitutions came too late for Chelsea, who were unable to apply sustained pressure to Ederson's goal.

This was only the second Premier League meeting between Man City and Chelsea as the division's top two sides, and with City's 12th consecutive Premier League win.

Only Preston North End and Liverpool having won 11 or more games in a row without winning the league, Guardiola's side appear to be champions elect.

Liverpool sat down for Real Madrid to win the Champions League with just 1 goal. What they did wrong

4 Exceptional Ways to Put Human Waste to Use in an Environmentally-Friendly Way.

3 Things That Cause Babies To Become Deformed

Ghanaian girl learning under streetlights gets help from a philanthropist group

Reasons You Should Not Text At Early Stages Of Relationship