Bercelona has announced the registration of their new players.

By Kings (self media writer) | 5 months ago 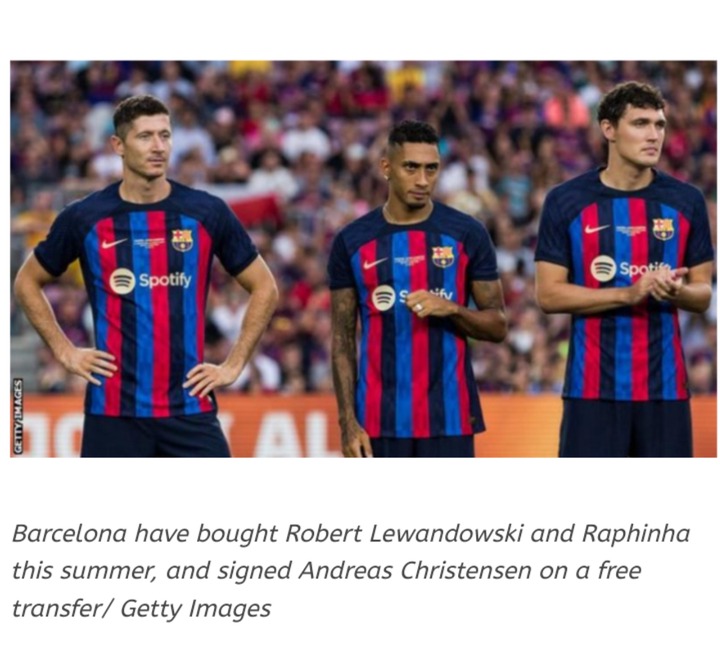 Following the Spanish Laliga financial regulation against FC Barcelona for their new signings, the club was unable to register their four signing such as Robert Lewandowski, Raphinha, etc to play laliga games yet to resume soon.

On Saturday, the club was able to announce an official registration in time for their first game of the season. These come as a result of most of the players reducing their salary levels to aid fund the club.

This communique was activated on Friday and now accepted by the La Liga football federation that the fourth signing of the FC Barcelona would now be able to play the first game of the La Liga for the FC Barcelona. The report again indicated that the club is still holding on the France defender Jules Kunde to complete his registration.

Before Jules Kounde will be registered, there are implications attached to it which are referring the club to freeing up their salaries mass in other to register him.

The restriction also applied to players who have renewed their contracts this summer, namely Ousmane Dembele and Sergi Roberto, but both have also been registered.

The club’s levers have involved selling shares of their future television rights and their media production unit Barca Studios.

The report has indicated that, on Friday, the club sold 24.5% of Barce Studios Madis for an amount of 1 euro in other to generate enough funds to satisfy La Liga and also permit Barcelona to register some of their new signings.

Speaking at his media conference at 17:00 BST on Friday, coach Xavi said Barca was “still working on it”, and had until two hours before kick-off for the registrations to be confirmed.

Barca opens their new campaign at home to Rayo Vallecano at 20:00 BST.

“The club is very positive,” said Xavi. “We’ve just announced the fourth lever and we believe that tomorrow will be arranged. Maybe not 100%, but we’ll see tomorrow.

“We still have up to two hours before kick-off. The club is doing a tremendous effort. I’m very happy and excited about the new signings and the team we have built.

“We’re now ready to compete but, in terms of registrations, we have until tomorrow, and right now we are optimistic.”

Content created and supplied by: Kings (via Opera News )