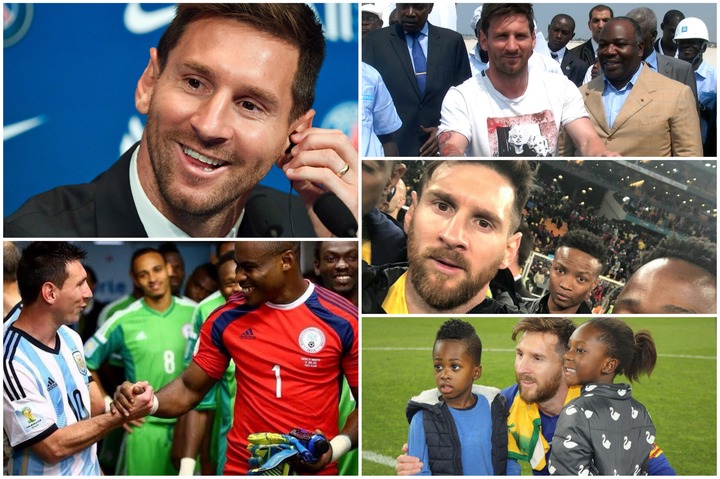 One of the sportsmen football fans wouldn't want see retire is Lionel Andres Messi Cuccitini. The man who hails from Argentina has had an industrious career in football, known for his unrivalled talent and his breathtaking displays whenever he took the field. The 34 year old currently has six Ballon d'or awards to his name, the most any player has ever managed and adjudged by many to be the greatest footballer of all time.

Virtually everybody wants to be recognized by famous people but stars like Messi have a quiet and reserved persona and not very much social. Messi hardly give fans attention compared to stars like Ronaldinho, Cristiano Ronaldo and Neymar. He mostly spends his leisure time with his family and his close friends are normally his club teammates nonetheless one likeable thing about the six times Ballon d'or win his love for Africans.

Messi has shown on numerous occasions Africans have a place in his Heart and take a look at some beautiful moments of Messi with Africans. In 2015 when Gabon were still preparing to host the 2017 African Cup of Nations, Lionel Messi honoured a promise he once made to Gabon's president, Ali Bongo Odinmba. Messi had made a behest to the president sometime ago in Barcelona that, he will come to Africa and visit him one day and he did exactly what he said. On his visit he was asked to lay the first block of a new stadium they were building for the 2017 AFCON and Messi didn't hesitate to do it. Apparently the Argentine magician wouldn't have done this if he didn't love Africans. Barcelona were invited to South Africa to play a friendly matched dubbed the Mandela Cup to commemorate the 100th birthday of befallen South Africa president, Nelson Mandela. They honoured the invitation and came along with their first team players including Lionel Messi. The Argentine was suffering from a flu and was only brought on in the 70th minute. But he made himself available to Mamelodi Sundowns players and fans who were desperate to take pictures with him after the match. In one of the best pictures taken at the 2014 world Cup, Messi was captured cracking jokes with Nigerian shotstopper, Vincent Enyeama. Messi isn't proficient in English and speaks Spanish, Enyeama neither understands nor speaks Spanish but both kept communicating and laughing in the tunnel and on the pitch. When Enyeama was asked what they were discussing, he said he didn't understand anything he said because Messi spoke Spanish. But clearly it was another moment depicting his love for Africans.

Just in: see what Despite Media has done for the legendary AB Crentsil.