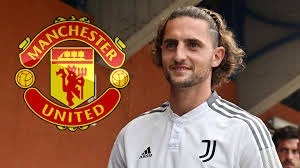 An agreement worth £15 million has been reached between Man United and its fourth summer recruitment target. Adrien Rabiot, a midfielder for Juventus, is supposedly in the process of signing for Manchester United, according to recent sources. According to The Guardian, the Red Devils have reached a deal with the Italian giants, who have approved the sale and are pleased with the sum that is being offered. The 15 million pound transfer price that has been agreed upon for the France international's move is subject to change depending on the add-ons that are included.

Savic is once again of interest to Manchester United.

Reports indicate that Manchester United, who play in the Premier League, have shown fresh interest in signing Sergej Milinkovic-Savic, who is a top player for Lazio. The gifted central midfielder has a market worth of sixty million euros at the moment.

Because Manchester United are interested in strengthening their midfield, they are likely to be trying to buy an extraordinary midfielder during this summer's transfer window.

A world-record offer from Chelsea is being prepared for Fofana.

According to football.london, Chelsea are prepared to pay an amount that is more than the current record transfer price for a defender in order to get the services of Wesley Fofana.

The current record is held by Harry Maguire, who moved from Leicester City to Manchester United in August 2019 for a transfer fee of £80 million. The Foxes might be on the verge of receiving another enormous amount for their most recent center-back prodigy, which would create a new record.

According to reports, the Premier League opponents of Thomas Tuchel's team have already turned down two offers for Harry Maguire. However, they are apparently working on a third offer that will likely outbid the price that Manchester United paid for Maguire.

This week, Alexis Sanchez is anticipated to arrive in Marseille.

According to Fabrizio Romano and Goal, the Chilean will reportedly end his contract with Inter Milan on Tuesday, and when he has resolved some tax issues, he will join with Olympic Marseille. It has been reported that the Chilean international has already provided the leaders of Marseille with his verbal consent, and he is expected to arrive in Provence on either Wednesday or Thursday of this week.

It is recommended that he sign a contract for either two years or one year plus an additional year with an annual compensation of about three million.

Issa Diop is expected to join with Fulham.

Issa Diop ultimately decided to join with Fulham after spending the first part of the transfer window on the shelves of Lyon. The promoted English team has struck an agreement with West Ham for the sale of the French central defender in exchange for 20 million euros. The deal will take place this summer. According to Goal, the formerly with West Ham player will put pen to paper on a five-year deal.