1. Messi is putting his record-breaking boots on auction to raise money for sick children.The boots he scored his 644th goal for Barcelona in are expected to raise a huge sum for the Arts and Health Project of the Vall Hebron University Hospital.

2. Alexandre Lacazette taking the knee right in the face of the Slavia Prague team who refuse to take the knee, who have a player banned for 10 games for racism, is the best thing you will see today.

3. Real Madrid staff has communicated Kroos and Modrić have reached their limit. The players are at risk of injury due to accumulated fatigue. Kroos forced himself to the maximum in the recovery of his muscle injury and Modrić has already played more than 4000 minutes.

4. Lallana on the Barcelona 4-0: “I remember Jürgen just said in the dressing room: Get one goal and Anfield will do the rest.”

5. Everton manager Carlo Ancelotti to Telegraph: “If PSG want Moise Kean on a permanent deal, they’ve to negotiate with us about it. We're open... but if nothing happens he'll be an Everton player next season, an important player”.

6. Real Madrid are not prepared to sell 22-year-old Norway midfielder Martin Odegaard, who is on loan at Arsenal until the end of the season.

7. Pierre-Emerick Aubameyang has revealed he is recovering from malaria after contracting the disease while on international duty with Gabon.

8. Wolves will try to sign Benfica's Brazilian forward Carlos Vinicius this summer after Tottenham chose not to make the 26-year-old's loan permanent.

9. Edin Džeko has scored more goals against Man Utd (7) than any other English club in his career and five have been at Old Trafford.

10. Former Manchester United defender Paul Parker disclosed that Sadio Mane has not been in his best form for Liverpool this season while Mohamed Salah has been the best forward in Jurgen Klopp’s set-up.

12. Barcelona are considering a move for RB Leipzig and Spain striker Dani Olmo, 22, who played at the Catalan club's academy.

13. Former coach Fabio Capello blames former Juventus midfielder Emre Can for Borussia Dortmund’s exit in the Champions League. ‘He gave away a penalty'.

14. Luka Modric has agreed a contract extension at Real Madrid through until 2022, reports diarioas which will mean the midfielder will complete 10 seasons at the club.

15. Barcelona and Real Madrid may be priced out of a deal for Borussia Dortmund striker Erling Braut Haaland.It has been reported that he wants a salary of £577,000 a week.

16. A 30-year-old man is facing possibly 13 years in prison for repeatedly attacking his girlfriend, fuelled by jealousy over her friendship with Mario Balotelli.

17. Paulo Fonseca insists reaching the Europa League semi-final against Manchester United ‘changes nothing’ for his future, while Roma ‘had Ajax under control.’

18. The Premier League has shifted its calendar to allow each club to play in front of its own supporters - but no away fans will be admitted.

19. Manchester United manager Ole Gunnar Solskjaer is ‘looking forward to’ the Europa League semi-final against Roma. ‘It feels like a proper European tie.’

20. Edin Dzeko is confident Roma can get past Manchester United in the Europa League semi-final, but admits he had to be ‘mentally strong’ to recover from his Paulo Fonseca row.

22. Ajax coach Erik ten Hag didn’t agree with the decision to disallow their second goal against Roma and insists ‘the best team has been eliminated' from the Europa League quarter-final.

23. Netherlands boss Frank de Boer has told Virgil van Dijk to forget about playing in this summer's European Championships and instead focus on his Liverpool comeback.

24. Former FIFA president Sepp Blatter says he will not appeal against the ban imposed on him last month, claiming the members of the world governing body's ethics committee are "biased".

25. Paul Pogba says Granada's players were trying to get him sent off during his fleeting appearance for Manchester United in the Europa League quarter-finals.

26. Luis Suarez is reportedly only likely to return to Liverpool during this summer's transfer window if the Reds sell Mohamed Salah.

27. Chelsea forward Timo Werner is reportedly facing a race against the clock to convince Thomas Tuchel that he is capable of firing the Blues to silverware.

28. Mikel Arteta labelled his youngsters a "joy to watch" as Arsenal put Slavia Prague to the sword to reach the Europa League semi-finals for the third time in four years. 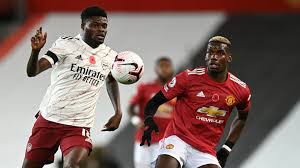