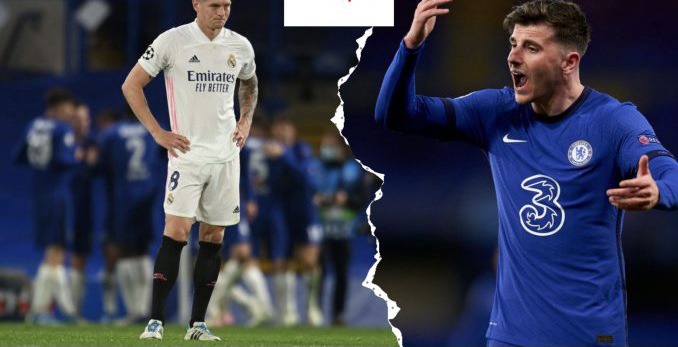 Chelsea managed a 2-0 victory over Real Madrid after missing several chances that would have had their goals ranked to 5.

With a first goal that was ruled offside, Timo Werner pushed on to finish off a perfect chip from Kai Havertz that came off as a rebound after meeting the top woodwork.

Although Real Madrid made efforts to pull the game back in their favor but Edouard Mendy with an awesome performance was brilliant with his saves.

N’Golo Kante named the man of the match for the second time after being for the first controlled the midfield and also made the impactful interception that led to the second goal.

On collecting a loose ball, Kante pushed on to move the ball over to Christian Pulisic who went on to make a super assist after repeating his dribble on Courtois after the first leg’s won him a goal.

This time it was Mount who found the back of the net making Pulisic the youngest footballer to score and assist in semi finals of the same campaign.

Real Madrid of a truth did confirm they were outclassed by a dedicated Chelsea side as this went contrary to Toni Kroos’ earlier claims that no midfielder has ever stole his sleep.

“The most difficult player to face at Chelsea? No player has ever taken my sleep in 15 years.” Kroos said. “They play well as a team but I can’t tell you a name.”

In response to this, Mount said after the game; “I saw one of their players [Kroos] saying he doesn’t lose sleep over any of our players. Maybe he should lose sleep over us as a team.”

“I can’t put it into words, really, at the moment.” the English man continued.

“The most important thing is that we won tonight. But it’s not over, there’s one more game left.”

“We gave it everything. We had that desire, we wanted to win. You could see in the first-half we had a couple of opportunities where we won the ball back and could’ve countered and scored, but we didn’t take them.

“But we got the one at the end so it doesn’t matter.”

Chelsea will battle Manchester City for the final after the Cityzens knocked off Parisians to advance into the final.