Reigning champions Asante Kotoko recorded their first win of the 2022/23 campaign as they beat Nsoatreman FC in their outstanding league game played this afternoon.

Goals in each half by Stephen Amankona and Isaac Oppong, handed the Porcupines all three points in this betPawa Premier League Matchday One outstanding encounter played at the Baba Yara Stadium in Kumasi.

Kotoko, were all out in their second home game of the campaign as they went for the three points, and, they achieved their aim with a dominant display in this afternoon's encounter. 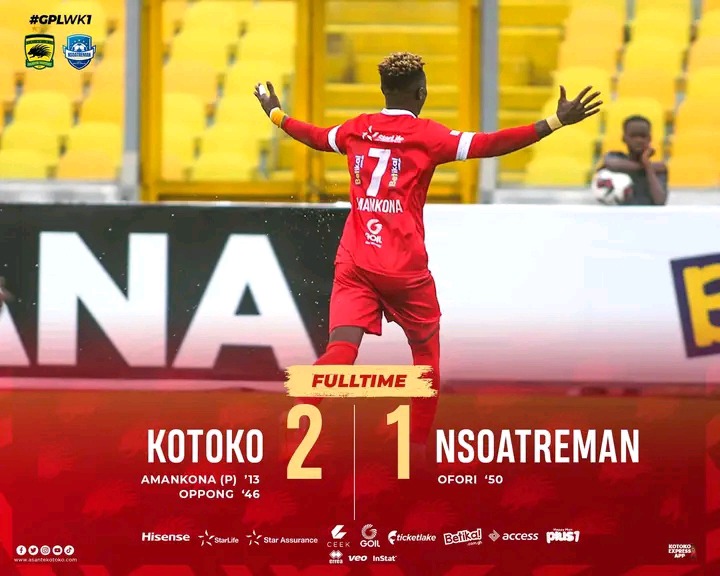 Stephen Amankona won and converted a 13th minute penalty to put Asante Kotoko ahead, a lead they held on for the first 45 minutes.

The Porcupines, doubled their lead early in the second session when Isaac Oppong, was set-up by Ugandan international Steven Dese Mukwala to score his first league goal of the league campaign.

Nsoatreman FC, scored a consolation through Philip Ofori as they attempted a comeback, but, it was all that they could gather as they went down to their first defeat of the campaign.

Kotoko, will look to take positives from this game as they head into the reminder of this campaign.

The Porcupines, will next play city rivals King Faisal Babes in a Matchday Four fixture in Kumasi on Sunday.

The game will be played at the Baba Yara Stadium and, it will be shown live on television with kick off set for 3:00pm local time.

Nsoatreman FC, will be home to Karela United in their next game on Sunday at Nsoatre as the league continues this weekend.