By Donwriter1 (self media writer) | 4 months ago 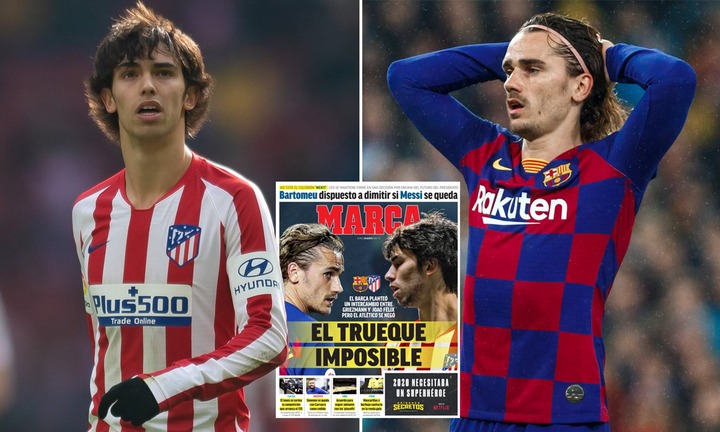 Barcelona had intended to propose a swap deal with Atletico Madrid involving Antoine Griezmann and Joao Felix, until Saul Niguez's name was put on the table.

The Catalan club continue to work hard, as they look to lower their wage bill while at the same time looking to re-sign Lionel Messi.

Quite a few players have already been removed, but the Catalan club will still need to offload some significant players in order to perform their difficult juggling act.

Because his wages are not in line with his contributions, Griezmann could be on the trading block. Because of the injury to Ousmane Dembele and Philippe Coutinho, however, finding a buyer for the two of them may prove difficult.

It is worth mentioning, however, that given the amount of money that Griezmann would demand and the large transfer fee that Barcelona would require, the Frenchman is a tough sell.

Atletico Madrid is an interested destination for Griezmann because they hold a positive memory of him with them. For accounting purposes, Barcelona chose to propose a player trade to ensure that the financial aspects of the transaction were correct.

Joao Felix had traveled in the opposite direction, but Los Colchoneros firmly rejected that idea.

Even if things were slow for him at the beginning in Madrid, and he doesn't get along with Simeone, Atleti still believe that the Portuguese forward represents the future for them.

When Saul entered the discussions, that was when his name became part of the debate. Barcelona are searching for a player who has his unique qualities, as the midfielder is interested in a new challenge.

Buying Griezmann will be a challenge

While it does not appear that the swap is on, Griezmann's salary has proven to be just too difficult for Atleti to handle. As a result, Barcelona have gone out of their way to find a suitable destination for the aging footballer whose sale is no longer considered an emergency measure.

It has also been reported that Manchester City have been approached, but have chosen to keep Griezmann as they have other players to pursue.

The player wants to remain at the Camp Nou, but the club cannot guarantee that his playing time will be sufficient in the 2021/22 season even if they could afford it.

With the arrivals of Memphis Depay and Sergio Aguero, along with the return of Ansu Fati, the situation in attack is now tipped heavily in favor of Messi, which helps to push Griezmann to one side.

Barcelona's quandary has not changed, and the time is ticking as they scramble to come to terms with it before the new season begins.