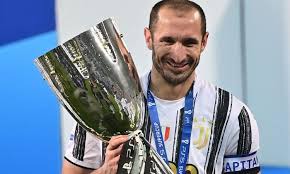 Juventus Captain( Georgio Chiellini) has his contract extended until June 2023. This center back defender had been a good play maker to his team eapecially his friend Leonardo Bonucci. This 36 year old player has made a good role from 2004 since he joined from Fiorentina club in the same league.

Because of his awing nature of the defensive aide of his game he is the current Captain for both Juventus and his national team ( Italy). This playmaker has also won 112 international caps making him the 6th highest appearance in Italy.

In the Euro 2020, his effort and guidance are intended to be the inspiration and motivation even during the harder times like the finals against England. Of which after the win many fans cheered and we're very much Happy for the better inculcation of victory since the year of 1968. Georgio chiellini love his country and will be willing to go whenever they call on him.

In Juventus, he has won nine consecutive Serie A titles from 2012 to 2020, as well as five Coppa Italia titles and five Supercoppa Italian titles having also played two UEFA Champions League finals in 2015 and 2017.

In this season, Juventus Captain could abreast many football values into his players and could win the best defender in Italy football in 2022, if only his form still remains or imorove. He could be a legend for his club team if only he lives a good mark for how team mates and his fans.

Even though he never scored goals in all his league games but was a strong muscle for Juventus during the times of pressure from the opposition. Captain Chiellini could still help his both club and natinal team to wins at least one trophy before his retirement age.

His great intensity can lift the faith and prowness of his club team in the next season since his current form is still perfect and dynamic. Also he is a great technical defender that reads the mind of most strikers and these strikers find it very difficult when passing through when he is at defence.

Content created and supplied by: Khelvynn2019 (via Opera News )