By Raysportz (self meida writer) | 26 days

The Premier league match week 31 ended yesterday as West Bromwich Albion defeated Southampton. It was a week full of action from Anfield to Selhurst park to Emirates stadium. The team of the is of interest as some players performed marvelously well. The best keeper of the week was Johnstone from West Brom. He guided his team to a win against Southampton. 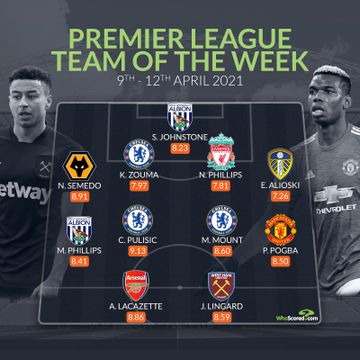 Semedo, Zouma, Philips and Alioski filled up the midfield. Zouma managed to score his fifth goal of the season with a staggering header.

In a midfield four, two Chelsea players, one Manchester United play and one west Bromwich player took their position. Mason Mount and Pulisic from Chelsea, Philips and Pogba from West Brom and Manchester United respectively.

Arsenal's star man Lacazette and the most recently on form player in the Premier league Jese Lingard secured the forward role.

Three players from Chelsea were included which was the most from a single team.