Okrah and Simba finish Asante Kotoko in a shameful style

By OnAndOffThePitch (self media writer) | 4 months ago

Ahead of the Betpawa premier league 2022/23 season and the CAF Champions League campiagn the Ghana Premier League champion travelled to Sudan for preseason after failing to go to Turkey as confirmed earlier.

This was the third preseason game for the Porcupine Warrior's in Sudan. The Porcupines had already played twice against the Sudanese champions which both ended in a defeat for Asante Kotoko. 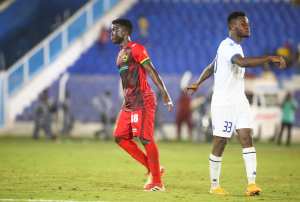 After playing those the porcupine warriors faced the Tanzanian Champions yesterday.

The ended 4-2 after the Porcupine Warriors scored the first goal of the game through the Uganda striker Dese Mukwala but the goal was equalised 10mins after through their former player Augustine Okrah, Simba then took the lead through the CAF Africa goal of the year winner Pape Ousmane Sakho.

Cletus Chama jr scored a brace to finish the game for the Tanzanian side. They prove beyond the understanding of Kotoko as the beat. It is the best way for the Porcupine Warriors to put smile in the faces of their upset supporters.

But Simba made the work simple with their unusual team.