By KobbyStt (self media writer) | 1 year ago

It has been a really tough game for Barcelona in the Semi finals. Barcelona played against Real Sociedad, De Jong'd early goal scored couldn't give the Barcelona side a simple win of the game as Sociedad was awarded a penalty and scored to end the normal playing time of 90 minutes in a draw.

Barcelona's wall Ter Stegen gave an outstanding performance as he was able to save the efforts of its opponent from winning the game by scoring goals.

Leo Messi, the captain of Barcelona team couldn't play in this game as expected due to an injury he had picked in the weekend fixture against Granada which ended 0-4 in favour of Barca. Messi scored 2 goals in that game.

The match against Real Sociedad ended in a 1-1 draw which took them to extra time but the scores didn't change.

There was penalty shootout where Barcelona were able to secure their win by scoring 2-3.

Dembele, Pjanic and Riqui Puig were able to find the net which gave the Catalans a sure win to the finals

Barcelona will play against either Real Madrid or Athletic Bilbao who will play tomorrow. The team to win faces Barcelona in the finals. 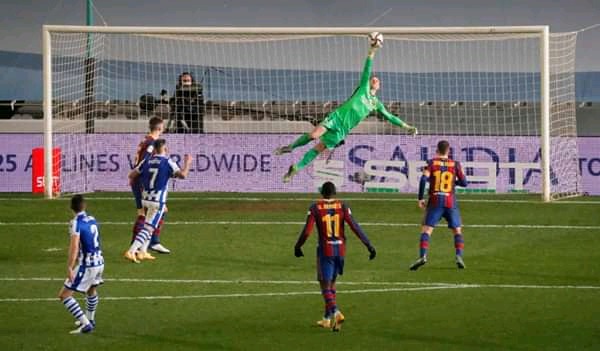 Content created and supplied by: KobbyStt (via Opera News )