By Asomahabu (self media writer) | 4 months ago 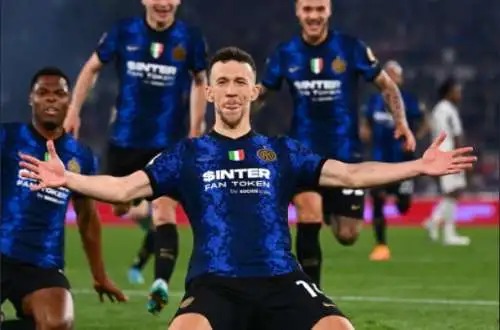 Ivan Perisic's brace in extra-time helped Inter clinch the Coppa Italia trophy for the first time since 2011 as Simone Inzaghi's side came from behind to beat reigning champions Inter in a pulsating match at the Stadio Olimpico.

Nicolo Barella's curled a beautiful shot into the top corner from the edge of the penalty area to give Inter a sixth-minute lead, a goal worthy of the stage.

This gave way to some heavy Juventus pressure and Inter were relieved to have a slender lead at the break. In an intense 10-minute spell, Dusan Vlahovic's angled shot tested Samir Handanovic while Paulo Dybala's effort on the half-volley drifted agonisingly wide.

However, the game was turned on its head in just 120 second half seconds. Alex Sandro reacted quickest to Vlahovic's blocked effort and his first-time shot was deflected past Handanovic by the foot of Alvaro Morata, who had replaced the injured Danilo.

Inter were still reeling from what they will consider an unfortunate equaliser when suddenly, on the counterattack, Dybala released Vlahovic and despite seeing his initial shot blocked, he kept his composure to roll the rebound into the net.

Having seized the initiative, Juventus then dropped their defensive line increasingly deep and after inviting pressure, Leonardo Bonucci caught Lautaro Martinez inside the box, with Hakan Calhanoglu confidently dispatching the penalty to send the game into extra-time.

The momentum was back in the Nerazzurri's favour and they were handed a golden opportunity six minutes into the first half of extra-time when Stefan de Vrij was fouled by compatriot Matthijs de Ligt inside the box and the referee pointed to the spot after re-watching the incident on the monitor. Perisic sent the goalkeeper the wrong way.

The Croatian sealed victory in stunning fashion just three minutes later, unleashing an arrowed shot past the helpless Mattia Perin as Inter finally ended their 11-year wait to get their hands on this prestigious trophy.

You can sign up to enjoy the full benefits at https://agrogame.com.gh/7/

Content created and supplied by: Asomahabu (via Opera News )