By HonEhEs (self media writer) | 25 days ago

Stats: Leverkusen scored past Celtic on an away trip by 4-0 and goalkeeper Hradecky was amazing for the visitors.

He made 6 saves of which 4 came inside the box, a clearance, and an accurate pass of 72%.

Stats: Gobeljic against Ludogorets Razgrad on an away trip played the full 90 minutes and made 55% accurate passes, an interception, clearance, and a tackle which was enough for a win.

Stats: Hancko scored the only goal in the win against the Scotland giants Rangers at home. He created a big chance, made 1 key pass, 3 tackles, 4 interceptions, a clearance, and 67% accurate passes.

Ratings: Hincapie was superb against Celtic as he also did contribute to their winning. He scored a goal, made 6 clearances, blocked a shot, an interception, a key pass, 87% accurate passes, and one shot on target which resulted in a goal.

Stats: Patric was very solid for Lazio as they won by 2-0 at home against Lokomotive Moscow. He scored one goal, made 2 clearances, 2 tackles, an interception, a blocked shot, 85 touches, 99% accurate passes, and total shots of 4. A very solid performance from the defender.

Stats: Zagreb won by 3-0 against Genk and Bruno scored amazing 2 goals. He was on fire as he made two shots on target, 65% accurate passes, 3 tackles, and fouled twice.

Stats: Masouras was very fierce against Fenerbahce as he scored 2 goals and assisted one in their 3-0 win. He made 68% accurate passes, 3 shots on target, 3 interceptions, a clearance, and blocked a shot. A very impressive performance.

Stats: This young starlet has been very impressive this season as has scored 2 goals so far in this campaign and looks forward to more. He also did contribute to his team's success. He scored a goal, made 81% accurate passes, 2 shots on target, and a successful tackle.

Stats: Quincy scored 2 goals in a 3-2 win against Napoli on away. He also gave 89% accurate passes, 4 key passes, an interception, and a tackle which was enough for a win.

Ratings: Lyon won 3-0 against Brondby at home and Ekambi contributed 2 goals and an assist. He also made 4 key passes, 88% accurate passes, 3 shots on target, and created 2 big chances. A very splendid performance.

Stats: Gakpo didn't score in their 4-0 win but had a rating of 8.2 because he gave 7 key passes, made 79% If accurate passes, created a big chance, an interception, and was fouled twice. 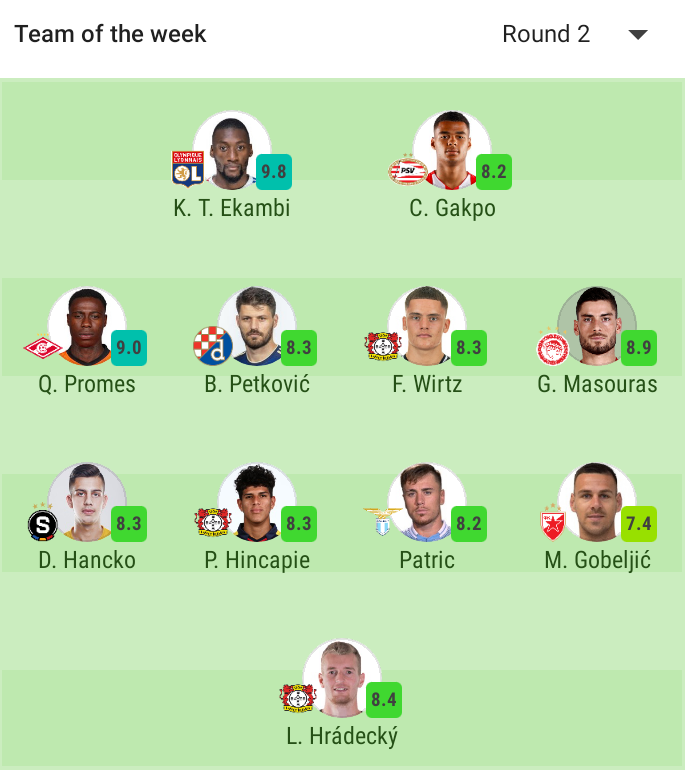