By Firstdaynews (self media writer) | 1 year ago

Chelsea bounced back from their shock 5-2 defeat to West Brom last week with a 4-1 win at Crystal Palace on Saturday and the Blues dominate the Premier League team of the week as a result. The Baggies followed up the aforementioned victory with a 3-0 triumph over Southampton and have two players in the XI, while representatives from Liverpool, Manchester United and Arsenal all make the cut.

West Brom earned a survival boosting 3-0 win over Southampton on Monday night with Sam Johnstone putting in a solid rearguard showing for the Baggies. The 28-year-old made four saves in all, including a late penalty stop to deny James Ward-Prowse in a clean sheet attaining performance that yielded a WhoScored rating of 8.23.

The main talking point from Wolves' 1-0 win at Fulham on Friday night was Pedro Neto's season-ending knee injury, but Nuno Espirito Santo's side recovered well to end a five-game winless run. Nelson Semedo impressed in the victory, earning a WhoScored rating of 8.91, as he made two key passes and completed two dribbles. However, it was Semedo's work off the ball that ensured the man of the match award as he made a whopping 10 tackles to secure a spot in the XI.

Kurt Zouma has struggled for regular game time under Thomas Tuchel, but the German kept faith with the centre-back for the trip to Crystal Palace despite a disappointing display against West Brom earlier this month. Zouma bagged his fifth league goal of the campaign at Selhurst Park and dealt with the aerial threat of Christian Benteke well, winning 10 headed battles, to feature with a WhoScored rating of 7.97.

Nathaniel Phillips makes the Premier League team of the week for the second week running after a man of the match display in Liverpool's 2-1 win over Aston Villa. The Reds secured their first home league win since mid-December on Saturday with Phillips solid at the heart of the defence. Indeed, the 24-year-old won 10 aerial duels and made seven clearances to contribute towards a WhoScored rating of 7.81.

Leeds secured a surprise 2-1 win at Manchester City on Saturday with Ezgjan Alioski putting in a fine shift from left-back for the Whites. Alioski picked the perfect time to register his first Premier League assist of the season, setting up Stuart Dallas' second goal late on at the Etihad Stadium, that coming from his only key pass for 10-man Leeds. Five clearances and three tackles helped the 29-year-old to a WhoScored rating of 7.26.

The second West Brom player to feature in the best XI this week, Matt Phillips bagged the Baggies' second 10 minutes before the break against Southampton on Monday, notching his second league goal of the season in the process. Phillips found a way past Fraser Forster with one of his two shots and Saints struggled to contain the winger as he made two key passes and completed two dribbles to yield a WhoScored rating of 8.41. 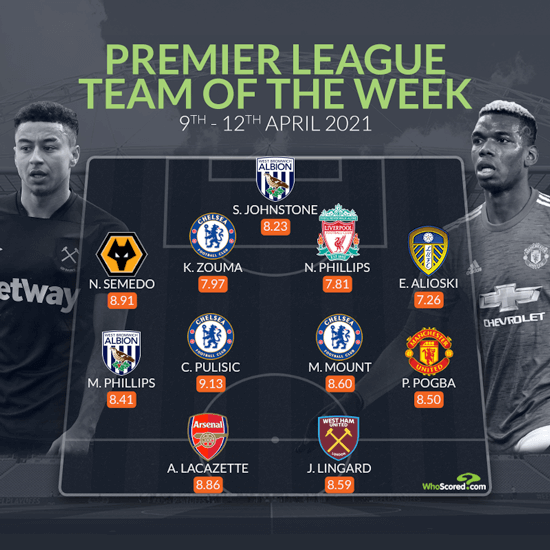 Chelsea stars to make Premier League team of the week"/>

Of the four league goals Christian Pulisic has scored this season, three have come in his last two league outings. The American has previous against Crystal Palace, having netted in Chelsea's 3-2 win at Selhurst Park in 2020/21 and was on hand to bag a brace in south London on Saturday. Pulisic's brace came from three shots, and he was unfortunate not to add an assist having made four key passes. In all, the 22-year-old put in a display that warranted the player of the week award with a WhoScored rating of 9.13.

The third and final Chelsea player in the best XI partners Pulisic in the middle of the park. Mason Mount registered his fourth league assist of the campaign, picking out Kurt Zouma from a free-kick on the half hour mark, that one of four key passes in the 4-1 win at Crystal Palace. An additional three dribbles and two tackles saw Mount come away from the London derby with a WhoScored rating of 8.60.

Sunday's 3-1 win at Tottenham marked Paul Pogba's second best rated Premier League performance of the season (8.50) as the Frenchman played a starring role in Manchester United's victory at the Tottenham Hotspur Stadium. Pogba provided the assist for Mason Greenwood's late strike in north London, that coming from one of two key passes. The United star broke forward well as he completed six dribbles to feature on the left.

A brace at Sheffield United moved Alexandre Lacazette to within one goal of his most prolific Premier League campaign as the Arsenal star scored his 12th and 13th top-flight goals of 2020/21 in the Gunners' 3-0 win on Sunday night. Lacazette netted with two of his four shots, while additional returns of two tackles, one key pass and one success dribble saw him garner a WhoScored rating of 8.86.

With a WhoScored rating of 8.59, Jesse Lingard rounds off the Premier League team of the week. In just nine appearances for West Ham, Lingard has netted eight times, with a brace against Leicester ensuring he has matched his most prolific Premier League season of his career. The England international scored with two of three shots in his second best rated top-flight performance of 2020/21.