By fenucarl (self media writer) | 1 month ago 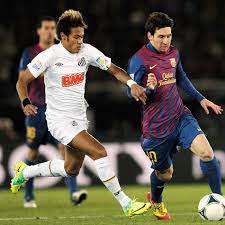 Neymar began playing football as a boy in São Vicente, under the guidance of his father, a former professional footballer who remained a close adviser and mentor throughout his son’s career. Having played street and indoor five-a-side football, Neymar joined Portuguesa Santista’s youth team in São Vicente, and in 2003 he and his family moved to Santos. There Neymar, who was already an impressive player, joined the youth academy of Santos FC (the same club for which Brazilian football legend Pelé starred over the majority of his domestic career). At age 14 he had a successful trial with Spain’s Real Madrid, and Santos had to increase its spending to retain him.

Neymar—a slender-framed 5-foot 9-inch (1.75-metre) forward—was supremely confident on the field, with excellent body control, quick reflexes, and explosive speed. He made his first-team debut with Santos in 2009. While playing with Santos, he averaged a goal every other match and helped the team win the Libertadores Cup (the most prestigious South American club competition) in 2011. Neymar’s many individual honours with Santos included the South American Footballer of the Year title in 2011 and 2012.

Content created and supplied by: fenucarl (via Opera News )