By Issahfahad (self media writer) | 4 months ago

One of the architects of Barcelona's new initiative is Robert Lewandowski, who is regarded as one of the best players in the world.

The Polish international, however, excels not just on the field but also in the business sphere. 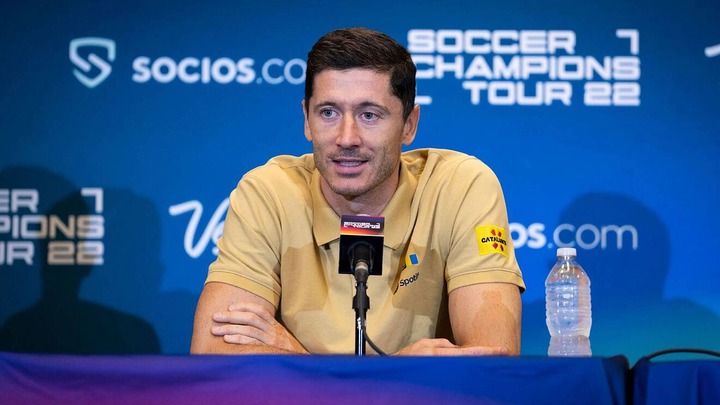 Forbes reports that Lewandowski's salary exceeds 30 million euros as a result of his sizable contract and numerous sponsorship agreements.

Only players like Neymar, Lionel Messi, and Cristiano Ronaldo made more money in 2021 than Lewandowski.

Lewandowski's football deal with Munich will pay him about 20 million euros in 2021 (it will be a little less in Barcelona).

The Pole reportedly earns 33 million euros year, according to Forbes, and the remaining 13 million euros come from his contracts with businesses and organizations such , Huawei and Procter & Gambl.

Lewandowski's company, RL9, is his most well-known and significant one; he even uses it as a screen name on social media.

In fact, there are rumors that the Catalan club may let him to use the jersey number that Memphis Depay presently sports and that is essential to his image.

In addition, the Polish player's wife, Anna Lewandowska, with whom he has various projects in development, is another crucial figure in comprehending the commercial transactions of the Polish player.

Lewandowski's wife owns the food and fitness company, Foods by Ann, where he sells a line of goods under his own name. The same is true of the clothing company 4F, where Lewandowska has a significant role.

The new Barcelona player also began playing Stor9 together with his wife as well.

It is a marketing, advertising, and public relations firm that collaborates with well-known corporations all over the world. It also joined forces with Group One to form RL Media, a division that also specializes in the communication industry.

But it goes further than that. Protos Venture Capital, another Polish business devoted to assisting the development of online entrepreneurs, has received funding from Lewandoswki.

The football player has started RL9.Games since he is interested in video games. The Pole also works in the food industry with his Nine's restaurant in Warsaw.

Content created and supplied by: Issahfahad (via Opera News )