Real Madrid has won the Spanish Super Cup for the second consecutive season, and Carlo Ancelotti is overjoyed to be back in the winner's circle. Ancelotti makes fun of Barcelona about possession game, claiming his said had too much possession for his liking. Carlo Ancelotti spoke in the press room at the King Fahd Stadium in Riyadh and gave his thoughts on the win over Athletic, which saw Real Madrid secure their twelfthSpanish Super Cup.

When asked if he and his players get bored of winning, the coach noted that he hadn't won a trophy since the German Super Cup in 2017.

"No, you don't get tired of winning," he said. I hadn't won anything since the Super Cup with Bayern Munich, so it had been a while.

I think I did a good job for Napoli and Everton, but I didn't win anything. I'm quite happy, and it makes me glad to see my teammates happy. They've achieved a lot, but they're still dedicated.

You can think you're the best and play the best football in the world if you win a lot. Then you might not put forth as much effort. The level of sacrifice, though, is the same."

Given their performances against Barcelona and Athletic, the coach believes his team deserved to win the cup. "I think both of our matches here have been terrific, and we deserved to win them both, even though they were different," he remarked.

We had good ball control for 70 minutes tonight before slipping deeper. However, in a final, anything can happen."

When asked if winning with the 2021/22 squad was more fulfilling than winning trophies with Los Blancos during his previous tenure, Ancelotti simply stated that it was different. "We have different players, but the same quality as before," he explained.

For example, we don't have Cristiano Ronaldo, but we do have Vincius and Rodrygo. 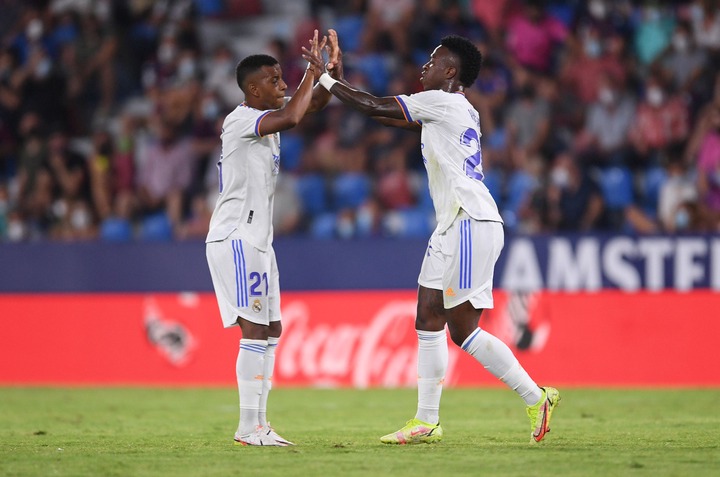 I am equally proud of both teams. This is a fantastic team and a fantastic group. We leave with more energy to compete, and we know that we can win in a variety of ways.

I consider myself fortunate and honored to be in charge of this club.

Naturally, we'll continue to compete in the other tournaments. Our next match is on Thursday, and it's a crucial one. We can make some alterations if we have some tired guys."

Carlo Ancelotti then went on to describe Courtois as the best goalkeeper in the world after magnificently saving Raul Garcia’s penalty.

He said “ Oh yes Courtois is the best in the world.”

Rodrygo's impact on the Supercopa final, according to Ancelotti

Rodrygo started in place of Marco Asensio, who was injured, and he was fantastic for his hour on the field. "Rodrygo has my trust," Ancelotti stated of the kid.

However, Asensio alternates between playing and not playing. The rivalry between them has benefited them both individually and as a team. Rodrygo had a great first half performance and was highly efficient, not just with the assist."

Marcelo's minutes, according to Ancelotti

Marcelo entered the game in the 86th minute, largely regarded as Ancelotti giving him the opportunity to compete in the tournament and win his 23rd title with the club.

"Marcelo has stayed professional and vital in the squad," the coach said, insisting that there was a tactical reason for the change. When I put him on, it wasn't a present for him.

For the last minutes, we wanted to make sure that the left side was fully covered. Because of his positive attitude every day, he deserves more time than he receives."

"We played out from the back very well, especially in the first half and against a very good pressing team. I think we had the quality to play out from the back and they found it difficult. It's always nice when you have a lot of possession like today".

He then laughs and says: “we had too much possession today.