My Wife Didn’t Take Everything, I Have Property In Ghana - Emmanuel Eboue

By Nyawvero (self meida writer) | 15 days 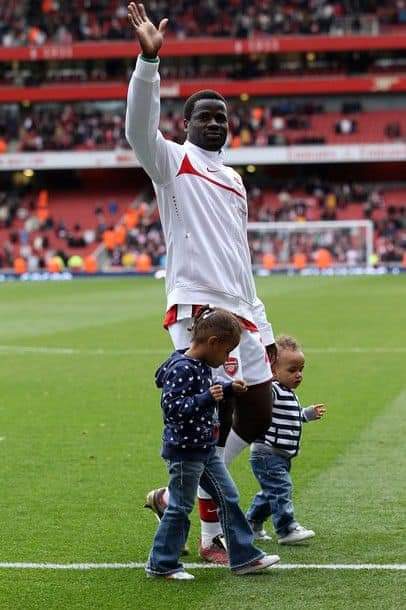 Ex-Ivorian international footballer and Arsenal defender, Emmanuel Eboue, has broken his silence over reports that claimed he went completely bankrupt after a bitter divorce battle stripped him of his assets in England somewhere 2017 almost four years ago.

The Ivorian football star was in the news to have lost everything in UK to Belgian ex-wife where he was on record to have said the divorce drove him to the brink of suicide after his wife, Aurelie, allegedly took everything he had including their three children, mansion, cars and their first house in North London where he was ordered by a court to surrender ownership.

His story is one of 'woiye' (pity), as it said, the down fall of a man is not the end of his life no matter what life must continue. The 38-year-old remarried his ex-fiancee, Stephanie Boedé, whom he left behind after moving from local team ASEC Mimosas to Europe and Turkey where he played with top clubs such as Galatasaray, Sunderland, and Arsenal.

Eboue, has come to clear the rumors about his current living status, putting on record that his ex-wife didn’t take everything, but rather he has property in Ghana and Côte d’Ivoire, as he was on record to have said;

I live very comfortably and I thank God. So when people keep talking and say Emmanuel Eboue doesn’t have anything, he can’t eat, doesn’t have a place to stay, it’s not true".