Ghana Faces Mali In All U17 Games with marvelous performance.

Guwahati, Oct 20 With very little separating the two in strategy and technique, Ghana could count on their better defensive organisation against Mali in an all-African quarterfinal of the FIFA U-17 World Cup here tomorrow.

Two-time champions Ghana are seeking to revive their glory days in the tournament, having last won it way back in 1995. 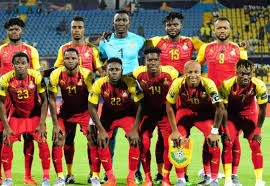 They have shown the intent from the word go, and barring the reverse against USA in the group stage, the Ghanians have been on the ball.

Ghana had been beaten 1-0 by Mali in the final of the Under-17 Africa Cup of Nations, and they would be determined to avenge that loss.

Besides a tight defensive unit and the speed of their attackers, Ghana will be backed up by a handful of vociferous globe-trotting supporters, who had been seen in all the venues so far in the tournament.

After the 2-0 win over debutants Niger in the pre- quarterfinals, Samuel Fabin's boys, as way of gesture, celebrated the victory with their hardcore backers, who go wherever the team goes.

Having topped Group A, Ghana eased into the last eight with goals from skipper Eric Ayiahstriking twice. Ayiah has led the Black Starlets from the front and is one of the top scorers of the tournament.

He will certainly be one of the players to watch out for at the Indira Gandhi Athletic Stadium tomorrow. Up against their west African counterparts, Ayiah, as well as coach Fabin, know the importance of the game.

"Definitely when you come to play a match of this nature, you look at the fans and when you see your countrymen there, it gives you confidence to (perform). They always expect us to beat them. The expectations are very huge, I would say," Fabin said.

He, however, remained concerned about the team's low conversion rate and wasted chances against Niger.

"Definitely, it is a concern, the erratic shooting and indecision. We are working on it, it is work in progress. We will keep correcting such mistakes till we get what we want. I am satisfied with the two goals we scored."

Thanks to their rock-solid defence comprising the duo of Najeeb Yakubu and Gideon Mensah, Ghana have conceded just one goal in three matches. They have also displayed a pacey brand of football, with Ayiah finding the back of the net against India and Niger.

He has formed a good partnership with the team's attacking midfielder, Sadiq Ibrahim, and they would fancy their chances against Mali.

While they left their opponents panting with their speed, the Ghanaians are aware that cutting through the Mali defence is a different proposition altogether.

Mali will certainly be high on confidence having pumped in five goals against Iraq and even though the Iraqi coach had accused them of fielding over-age players, Jonas Komla's side would not read too much into that.

Mali's Lassana N'Diaye has now scored five goals in four matches and he will fancy his chances against Ghana.

Against Iraq, Mali toyed with the rival defence with repeated forays. Ghana are expected to be a different ballgame, though, and heading into the game coach Komla's biggest concern is Mali's defence.

Mali have already conceded five goals in the tournament and they would need to tighten against their strong African rivals.

While Ghana topped their group with two wins, Mali stood second in Group C with equal number of victories.

Content created and supplied by: Rexada (via Opera News )