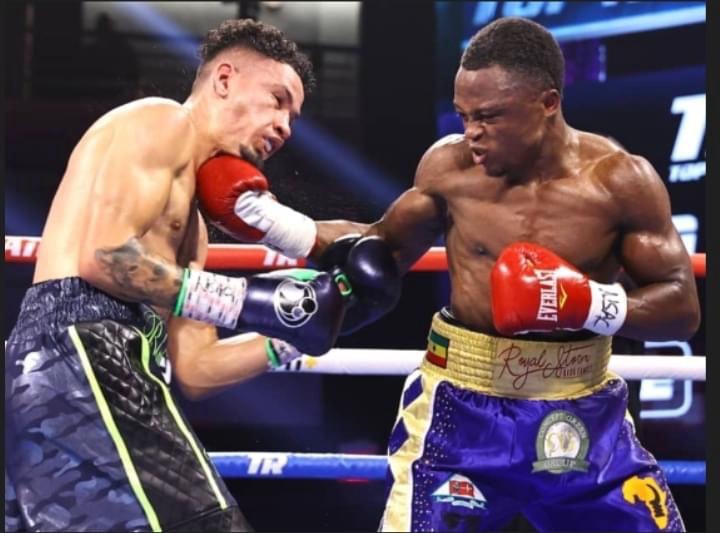 An almost dead career seem to have been resurrected last Saturday into the late hours of Sunday for Ghana’s Isaac Dogboe.

The 26-year-old recorded a majority decision over Adam Lopez in the United States to sort of revive his dying career.

Dogboe at a point his career was regarded as the next Azumah Nelson after his exploits a few years ago.

He was a prospect many thought was going to wipe the tears of Ghanaians there has not been recognized world champions in the last few years.

However, after all the trio’s somehow dwindling performance and a subsequent fall in their latter fights, Ghana has struggled to hold on to a title.

Isaac Dogboe began his journey into the limelight after a respectable performance at the 2012 Olympic Games in London where he was the brightest spot for Ghana in the Bantamweight Division.

Ever since the Olympic feat, Dogboe has moved steadily yet ambitiously up the boxing ladder.

The fight that shot Dogboe into the limelight was his retention of the WBO International Bantamweight title against Argentine, Javier Chacon in 2017 at the Bukom Boxing Arena.

He stopped the Argentine to retain his title, going 17-0 record.

He was on on the road again to defeat Mexico boxer, Cesar Juarez in 2018 by TKO to claim the vacant WBO interim junior featherweight title.

The win took the Voltarian to 18-0 record.

Dogboe did not end the onslaught but went on to claim yet another world title from a formidable opponent in April 2018.

He stopped Mexican American, Jesse Magdaleno in a TKO of round 11 in the United States.

The stoppage ensured Isaac Dogboe will increase his winning tally to 19-0.

Dogboe went 20-0 on his record with a win over Japanese veteran, Hidenori Otake in August, 2018.

After this beautiful journey of meteoric rise, many boxing pundit thought Dogboe will go on to win more fights to cement the assertions that, “he is Ghana’s next big boxing shot.”

Navarrete beat Isaac Dogboe twice to send the Ghanaian in hibernation for a period.

Their first bout was in December 2018 which Navarrete won with a Unanimous Decision after twelve round in the US.

Dogboe was never the same after that second defeat and did not fight until July, 2020.

He defeated American Chris Avalos in a non-title fight in the US in his come back fight.

After that victory, Dogboe went off the scene for a period before returning on June 19, 2021 to beat Adam Lopez of US by a majority decision in America.

Isaac Dogboe has moved up to the Featherweight Division but the question remains whether Dogboe will win a world title once again.

Judging from the fight he put against Lopez, there is still more boxing left in him however it remains to be see the kind of opponent he will come up against to determine his chances of claiming a world title.