By KwakuRighteous (self media writer) | 21 days ago 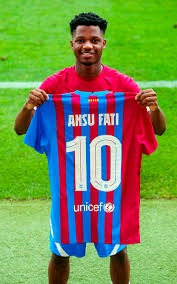 Anssumane "Ansu" Fati Vieira (born 31 October 2002) is a Spanish professional footballer who plays as a forward for La Liga club Barcelona and the Spain national team.

He was born in Guinea-Bissau but chose to represent the Spanish national team. He is widely considered as one of Spain's most exciting football talents, and one of the best young players in the world.

Ansu was given the number ten(10) Jersey number to replace the Almighty camp nou giant Lionel Andreas Messi. His impact to Fc Barcelona is really impressive.

The Spanish and Barcelona future star Ansu Fati was substituted against Levante UD since last season where he had an ankle long injury. His return on the pitch was something different by adding additional goal to memphis and Luke Dejong's goal making it three goals to nill (3:0).

Ansu Fati scored a magnificent goal of which the la liga board thinks he deserves to be the king of the match after his injury recovery. Many pundits are worried about him getting the man of the match with just few minutes to stoppage time.

His Man of the match award today has set a new record in laligar satandare.

Beauties Debate: Between Kristiana And Raven; Who Is More Beautiful And Endowed With Heavy Shapes.

VIDEO: Guy Seems Not To Be Exhausted As Lady Was Trying To Put Him In The Mood

It cannot be business as usual: Sammy Gyamfi sends a message to the NDC ahead of the 2024 elections