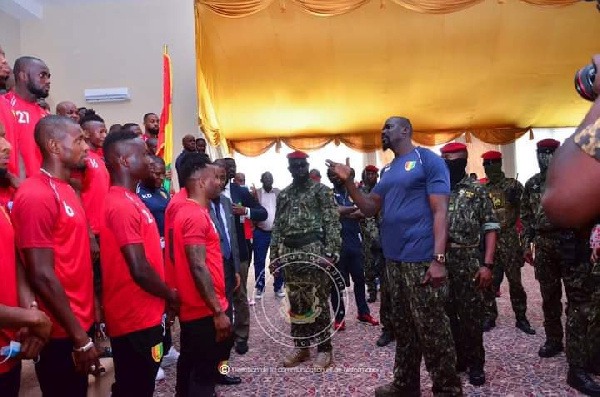 Colonel Mamady Doumbouya, Guinea's temporary president, is said to have forgiven the National Elephants for their Round of 16 exit from the ongoing 2021 Africa Cup of Nations.

Colonel Mamady Doumbouya had instructed the National Elephants of Guinea before the commencement of the competition that they had to win the tournament or the country's money would be returned, and they excelled in the group stages.

However, a 1-0 defeat to Gambia ended their chances of winning the AFCON for the first time in their history, as they were knocked out of the competition.

He does, however, demand a partial reimbursement because the budget was intended to get them to the competition's semi-finals rather than the Round of 16.

"The team has been forgiven by President Mamady Doumbouya." His ultimatum, he claims, was only intended to motivate them. He realizes that forming a team takes time," says the author.

"BUT the money paid to the team covered the quarterfinals, semifinals, and final games and must be returned to the state coffers," Saddick Adams wrote on Twitter.

Straight to hell for disobeying the Bible and making life difficult for us. Bonsam to Nana Addo.

Pastors Collapsed My Savings And Loans Company; I Lost Over GHs200K - France Based Musician Reveals

If E-levy does not change our lives, we will deal with you—Prince David Osei warns the government.

"I'm Dating 6 Married Men, I Set Conditions For Them Including Giving Me 378k Monthly" Lady Opens Up

Must Girlfriends Demand An Allowance? Why You Should Not Put Your Girlfriend On A Monthly Allowance