Accra Hearts of Oak moved to the third position on the Ghana Premier League, GPL table with a comfortable win over Dreams FC this afternoon.

Their win was one of five victories recorded in the GPL Matchday 27 action on Sunday as the competition continued.

Hearts of Oak beat Dreams FC 3-1 at the Accra Sports Stadium to continue with the defence of the title they won last season.

The Phobians posted their 11th win of the campaign to move third on the table 12 points behind leaders Asante Kotoko.

Dreams FC are hovering around the relegation zone just three points from the bottom three with seven matches to end the campaign. 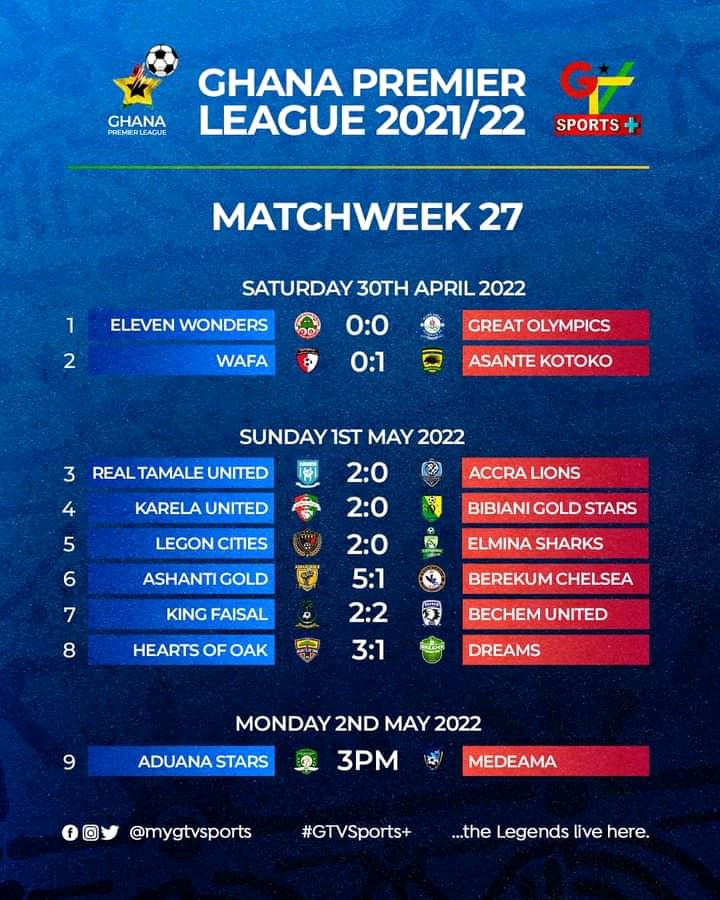 AshantiGold SC were impressive 5-1 winners over visiting Berekum Chelsea at the Len Clay Stadium at Obuasi where forward Yaw Annor scored four goals to take his tally for the season to 16 goals.

The Miners are 10th on the table with 38 points, a point behind Berekum Chelsea who are ninth as the season draws to a close.

Legon Cities continued with their good run as they defeated bottom side Elmina Sharks 2-0 at the El-Wak Military Sports Stadium in Accra to move eighth on the table with 39 points.

Real Tamale United, RTU recorded the same result at home to Accra Lions in a game played at the Aliu Mahama Sports Stadium in Tamale.

The northern giants are unbeaten in their last three games as they sit just over the relegation zone.

Karela United beat Bibiani Gold Stars 2-0 at the Crossby Awuah Memorial Park to jump to sixth on the table with 40 points leaving the Miners in 11th position with 35 points.

Second placed Bechem United drew 2-2 with King Faisal Babes at the Baba Yara Stadium in Kumasi in a very contagious encounter that did not go down well with either side.

Faisal are 15th on the table just two points from the relegation zone ahead of the Matchday 28 fixtures this weekend.

Check out the main reasons why wrestlers have deformed ears.