By Firstdaynews (self meida writer) | 20 days

With eight games to go in the 2020/21 LaLiga season, just two points separate the top three in the final stretch. Atletico Madrid's 1-1 draw at Real Betis, coupled with Real Madrid's Clasico win over Barcelona on Saturday, means it is all to play for in Spain's top tier and Spanish football's three more recognised teams battle it out for domestic glory.

Atletico top the table with 67 points to their name, but the unstoppable form they showed earlier in the campaign has deserted them. Indeed, after a run of 15 wins and one defeat in 16 between mid-October and the end of January, Los Colchoneros have laboured to just four wins in 11 from the start of February onwards. Had the season started on February 1st, Atletico's current form would have them fifth in the table with 17 points from their last 11 matches.

Over the same period, Real Madrid (26) and Barcelona (25) sit first and second, respectively, with the two powerhouses showing title winning form. Prior to Saturday's Clasico, Barcelona were on a 19-game unbeaten run to lift them back into contention for the title. Defeat may have left a bitter taste in the mouth, but only two points off top spot, there remains a chance the Blaugrana will wrestle the title back from Real Madrid this season.

It is negligible, yet, of the three title contenders, it's Barcelona (6.577) who have the easier run in. Taking the average ratings of their opponents at home and away, accordingly, WhoScored have determined that the Blaugrana have a more comfortable end to the campaign than Real Madrid (6.598) and Atletico (6.596).

Crucially, is that Barcelona will be playing catch up from this weekend onwards. The Blaugrana defeated Athletic Club in the 2020/21 Copa Del Rey final on Saturday and they'll end their campaign with at least one piece of silverware after a 4-0 victory on Saturday night, while their game in hand is the welcome of a Granada side that boasts one of the worst away records in the division at the end of April. The crunch clash for Barcelona and Atletico in the title race, though, comes on the weekend of May 8th. However, Atletico are the only side Barcelona face inside the current top seven between now and the end of the campaign, which is why their end to the campaign is deemed the easiest of the trio.

Atletico are fortunate in that they return to league duties with the welcome of basement boys Eibar this weekend as they look to kick off the final slog with three huge points. Not only do they face Barcelona in May, they follow up that trip to Camp Nou with the welcome of fifth-placed Real Sociedad three days later in season-defining four-day period. 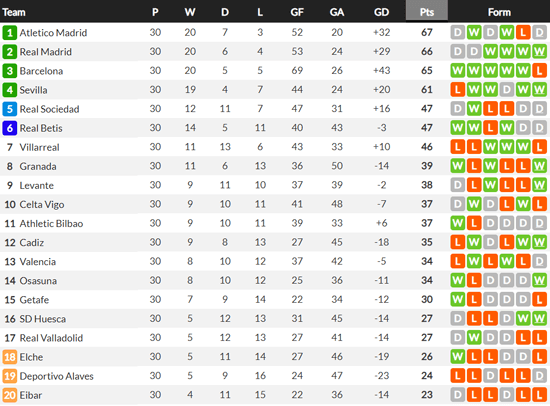 Real Madrid, of course, will have one eye on that meeting between the title rivals on May 8th, but they can't afford to lose focus on the task at hand. A day later, Los Blancos welcome Sevilla to the Estadio Alfredo Di Stefano and while Real Madrid have won their last five home meetings with the Seville side, they can't afford to rest on their laurels.

On top of that, Real Madrid take on four of the current top seven to see out the campaign, coming up against Real Betis at the end of the month and Villarreal on the final day of 2020/21 in what will be a testing finale for Zinedine Zidane's injury-hit side to run alongside their ongoing Champions League campaign.

Either way, when it seemed there would be another changing of the guard in Spain, Atletico Madrid's slip up has presented Real Madrid and Barcelona with a chance to sneak into top spot before the campaign comes to a head. Importantly for Los Blancos, they have the superior head-to-head record over both Atletico and Barcelona, so if it comes to it, they can call upon they fine performances over the duo to help deliver domestic glory.

As is to be expected, though, that gameweek on the weekend May 8th will be massive in the title race with just three games left to play after that weekend.