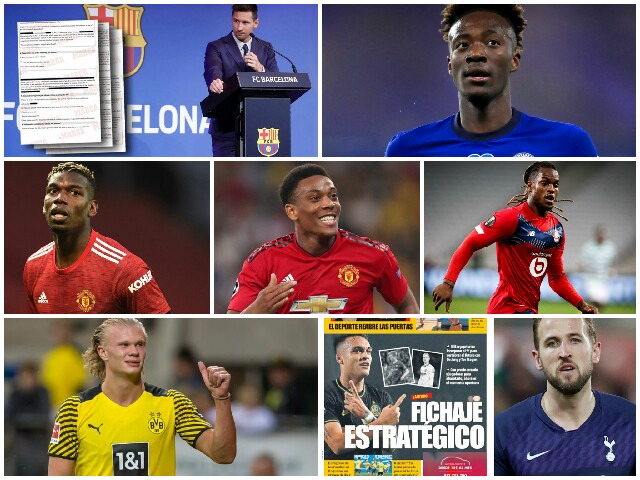 Barcelona are making attempt to block Messi's move to PSG

Barcelona aren't only worried about their former talisman leaving the club but are uncomfortable with fact that he's joining Paris Saint-Germain. The club has joined forces with one Lawyer Juan Branco, to take Paris Saint-Germain to the European Commission to stop them from proceeding with the transfer. Barcelona understand that, by signing Lionel Messi, Paris Saint-Germain would breach the financial fair play rules and are willing to take the matter to court to abrogate the transfer. The French giant's have already proposed a salary worth €40m for the six times balloon d'or winner and if Barcelona court attempt proved futile, the deal would push through.

Seria A champions, Inter Milan have started their search for a new striker to fill Lukaku's void. The Nerazzurri struck an agreement Chelsea to sell the Belgian striker for £97.5m and with few weeks for the 2021/22 season to begin, there are desperate to bring in a new striker. Latest news from Italy says, the Nerazzurri are interested in out-of-favour Manchester United striker, Antony Martial and are willing to snap the French striker if Manchester would agree to let him leave.

Haaland is a target for Bayern Munich

Sensational Norwegian hitman, Erling Haaland has emerged a surprise target for Bayern Munich. With Lewandowski aging, the Bavarians are searching for a long time replacement for the Polish striker and the Borussia Dortmund striker is a new target on their wishlist. The 21 year old was heavily linked to Chelsea this summer but the move failed to materialize following his astronomical price tag. Bayern may take advantage of the failed move and sign him next summer, nonetheless it remains unclear whether Dortmund will sell the Norwegian to their fierce league rivals.

PSG ends their interest in Pogba amid Messi links

Paul Pogba's future at Manchester United has been gloomy for some time following his increased rumours to Pairs Saint-Germain. However latest news from France says Paris Saint-Germain's pursuit for the Manchester United midfielder has been thrown into doubt, following their chase for Lionel Messi. The French giants have prepared a monstrous contract for the Argentine and would not take a risk of making another extravagant purchase.

Liverpool have intensified their chase for Portugal and Lille midfielder, Renato Sanches as they search for Wijnaldum's replacement. The Portuguese midfielder has been linked with a move to Barcelona for sometime but Liverpool are set hijack the move and sign Sanches. Lille hierarchy have told Renato Sanches's suitors that, a bid of £29m will be enough to snap the 25 year old.

Chelsea striker, Tammy Abraham has been heavily linked with a move from Chelsea for the past weeks. Chelsea move for Lukaku means the 23 year old would be offloaded this summer and it was rumoured early on that, he would join Arsenal or Atalanta. However latest news from Italy says, Seria A outfit, AS Roma have joined the race for the English star and the move is a suggestion from their new coach, Jose Mourinho, who believes Tammy Abraham can fortify the clubs firepower by bringing him to the Olympico.