Check out the live telecast of the GPL Matchday 14 fixtures

The Ghana Football Association, (GFA) in collaboration with its television partners StarTimes, have announced the live television schedule for the Matchday 14 fixtures in the ongoing Ghana Premier League, (GPL) this weekend. 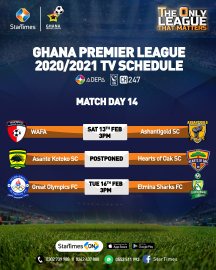 Originally planned to be three, there will now be two live matches following the postponement of the super clash between Kumasi Asante Kotoko and Accra Hearts of Oak.

Kotoko will be in Africa club competition this Sunday at the Accra Sports Stadium against Algerian side ES Setif, and, therefore cannot honour the game with their fierce rivals on the local scene.

That game has been postponed to February 28 with the venue still the Accra Sports Stadium.

Two matches have been penciled in for these round of matches with the action starting on Saturday at Sogakope.

WAFA are eighth on the table after 13 matches and, they host 10th placed AshantiGold SC at the Red Bull Arena.

The two sides are separated by just a point on the table and, that game starts at 3:00pm and will be shown live on the StarTimes Adepa TV channel.

The other game scheduled for live television will be the Great Olympics vs Elmina Sharks encounter at the Accra Sports Stadium.

This game will be played on Tuesday and, it kicks off at 3:00pm as fourth placed Great Olympics goes in search of their seventh win of the campaign against the 11th placed side who are winless on their travels.

CAF Prez to arrive in Ghana for 2-day visit