Ronaldo proves two things after the important win over Udinese 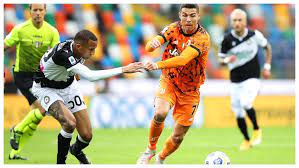 Juventus have broken their long lasting record by failing to win the serie A this season. As usual, hands have been pointed at some players and authorities to be responsible for this downfall. One of these people are obviously Andrea Pirlo, the head coach for Juventus and Cristiano Ronaldo. Some feeds from the media suggest Ronaldo is not happy at Juventus at all due to the blames and overall output of the team.

The blames on Ronaldo stem from the fact that, Juventus before his arrival were giants when it came to Serie A unlike now where they are even fighting for a place in the UEFA champions league next season. Juventus pulled off a stunning come back on Udinese after a very needed brace from Cristiano Ronaldo after about 80 minutes played in the match.

This win shows Ronaldo's total commitment and determination in the game of football. He is certainly a player who can make a difference in almost every game. But you know what, he cant do that. He cannot defend and stop all goals as well as score all goals in every match. He needs a good structure, good players, a good set of tactics as any player to make an impact in the game.

The argument people make is that which blames Ronaldo for his imperfection. Ronaldo cant perform as well in every single game. If not anything he is the number one man every opposing manger plans to stop in order to attain victory and so he is mostly given the least space in the game. In Real Madrid, one of the reasons Ronaldo flourished was because the team was built around him. Not for him to play as a single man team but they created chances for him and created a system he could only flourish in. And on his off days the other players were more than capable of delivering. That is what a team is for. It is true that his prowess in the game has diminished but it is obvious that in every game he challenges himself to give off the very best and i think the problem at Juventus is in more of the setup.

More of the tactics at play. An experienced manager is all they need to turn things around. They have individual brilliance but not much collective perfection and effort. I strongly suggest letting Pirlo go for a much more experienced coach who would love a goal machine like Ronaldo and brilliant players like Chiesa, Dybala among others.

Content created and supplied by: Kofi100 (via Opera News )