Ronaldinho, Messi, Ronaldo, Drogba and others who almost joined Arsenal before they turned star 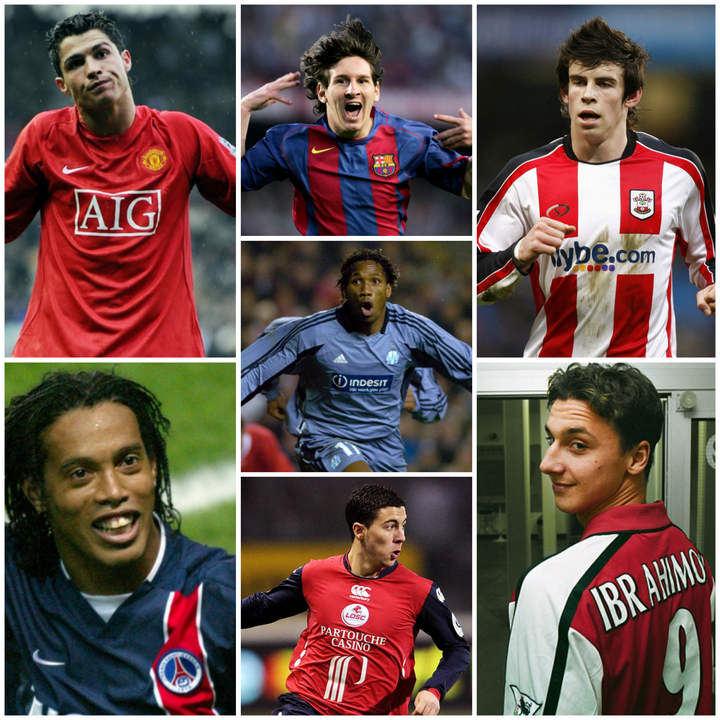 Have you ever wondered what football could've turn out to be if Ronaldo, Messi and Ronaldinho had played for Arsenal? You may not know about this but it will interest you to know that the Gunners came quite close to signing the aforementioned household names and many others but for some reasons, the deals failed to push through. After Arsenal Wenger was appointed the club's manager in the summer of 1996, he gradually evolved the club to one of the formidable teams in European winning 11 trophies in the space of 8 years. One of the factors that contributed to the French man's success was his rare speciality of spotting talents.

His time as the Gunners manager marked the arrival of some marquee players like Thierry Henry, Patrick Viera, Van Persie, Fabregas, Andre Ashavin, and several others who ended up at Arsenal because of Wenger's incredible eye for talents. Wenger made prior contacts with many other household names and almost signed them for Arsenal, however shortly after he failed to sign them, they went on to blossom into the stars we know them to be now. Take a look at some big names who almost joined Arsenal years back.

The five times ballon d'or winner almost joined Arsenal in 2003 from Lisbon before he switched to Manchester United. According to Arsene Wenger, Arsenal had agreed person terms with the Ronaldo and Sporting Lisbon and was due to be handed the number 9 jersey, only for Manchester United to appear from no where to hijack the move in the eleventh hour. Wenger revealed that, Manchester United then assistant coach, Carlos Quieroz, who had coached Lisbon few years back convinced Lisbon to sell Ronaldo to Manchester United instead.

The Gunners almost signed another multiple ballon winner and a player who many consider the greatest player ever, few decades ago. In the late 2000's when La Masia had host of exciting young talents coming through their ranks, it caught the attention of several European clubs including Arsenal. According to Wenger, they wanted to sign Fabregas, Gerald Pique and Lionel Messi who were the most talented among their age group, however they only managed to sign Fabregas among the trio. When asked why they couldn't sign Messi he said, Messi and his family were just comfortable at Spain. Perhaps if Arsenal had insisted and pushed to sign Messi the deal would have gone through.

If Wenger and Arsenal had things their way, Ronaldinho would have joined Arsenal right form his boyhood club, Gremio rather than Paris Saint-Germain. The Brazilian football icon is the most skillful footballers to ever play the game. His notable years in his career was his spell at Barcelona, where he won the ballon d'or and the World best player. Wenger also disclosed the how he met Ronaldinho's brother, Roberto de Asis Moreira and his club to strike an agreement to sign the Brazilian. But since Ronaldinho was a non-EU(European Union) player, and had played fewer games for Brazil national team, he couldn't secure a work permit. As Arsenal kept waiting, Paris Saint-Germain went ahead to complete the transfer.

The Ivorian striker is one of the players Arsenal look back and regret relinquishing after they refused to take the chance they had to purchase him. Drogba surprisingly turned out to be a thorn in Arsenal's flesh in Chelsea shirt few years afterwards and tormented their defence for several years. Arsenal had no impediment surrounding Drogba's deal, and could have completed it easily. In fact Arsenal spotted him during his time at Le Mans, his first European club but Wenger cited Arsenal's lack of believe to be the reason they pull out of Drogba's deal.

Arsenal were one of the first clubs to the make early contact with the Belgian sensational prior to his move to Chelsea. At age 17, Eden Hazard had the world at his feet and was virtually unplayable. The Gunners spotted the Belgian's talent and made an approach but were reluctant to meet the hefty financial requirements involved in the deal. Their league rivals, Chelsea later entered the race, settled his transfer fees and went ahead to complete the deal.

The Swedish goal machine's talent has been very evident since his teenage years and Arsenal were one of the first clubs who spotted the Ibrahimovic early. He was just 16 years and was already built physically and adept technically for a top team. Ibrahimovic was ready to join Arsenal and his agency held talks with Wenger, however Arsenal required Ibrahimovic to come for trial for final evaluation before they sign him. Zlatan insisted he was good enough to play and didn't need auditioning. He told Wenger it is either the club go ahead with the transfer or forget about him and that was the end.

The pacy winger was once on the cards of Arsenal but the transfer never materialized. Bale was one of the fledgling prodigies at Southampton who attracted mammoth attention from several English top clubs. Arsenal were interested Gareth Bale and Theo Walcott who were all at Southampton then. However, Wenger decided to opt for Walcott and ignored the Welsh winger because he felt Gareth Bale had a lot to learn.

These happen to be some of the big names in football Arsenal almost signed before they became stars. There are many others like Dminitri Payet, Angel Di Maria, Kylian Mbappe and Kingsley Coman who Arsenal made approach to sign but in their cases, they rejected the advances and joined other clubs.