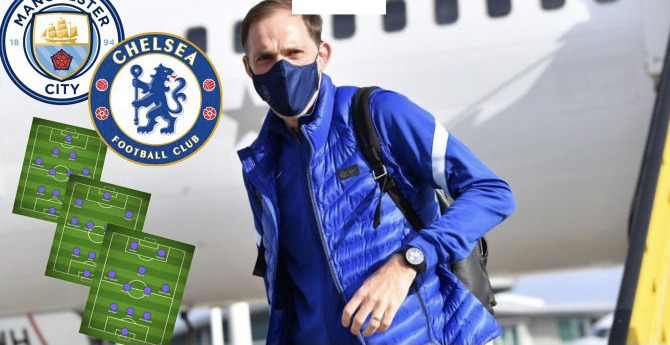 The Blues will be meeting Manchester City for the third time under Thomas Tuchel.

The last two encounters saw a victorious Chelsea side who managed two victories in all of the games.

Although this proves a kind of worry for Guardiola who is careful of losing the third time to one manager in one season.

Prior their trips to Portugal, Chelsea were handed with a kind of setback news after Edouard Mendy clashed with the woodwork.

N’Golo Kante was another name who asked to be subbed off their game against Leicester City and as such grew worry for the side.

But luckily for the West Londoners, both men are back to the line up as they travelled among the troops to Porto.

We take a look at different possible means Thomas Tuchel could line up his men against Manchester City tonight.

3-4-3 With Kante Returning To The Center

Thomas Tuchel could maintain his normal fielding structure as Kante returns to his role as the holding midfielder.

But this time around he links up with Mateo Kovacic as Jorginho is rumored by close sources to be starting from the bench tonight.

Both wings could likely feature Ben Chilwell and Reece James as Chilwell has been announced fully fit after being feared injured resulting from the rough tackle prior to their Aston Villa game.

Edouard Mendy returns to the goalpost as he is now also fully fit.

Pulisic, Havertz and Ziyech are likely to start up front.

The 3-5-2 is another probable set up the German tactician could employ on Saturday night.

This formation proves brutal to enemies 18-yard box as it would be fielding the combination of Pulisic and Kai Havertz.

Havertz’s composure and control in front of goalposts is similar to that of Christian Pulisic’s who put out a pretty good performance against Courtois in the previous stage.

Mount now provides support as a kind of number 10 where he would be collecting from a middle combo of Kovcic and Kante to supply their men up front.

There is also a tendency of having Azpilicueta at the wing back position while Hudson-Odoi starts from the bench.

Here is another likely setup for the game tomorrow which would mean so much responsibility on the shoulder of misfiring Timo Werner.

But things would be eased by a duo support of Pulisic and Mason Mount.

Hudson-Odoi is fully fit and could be deployed right side just like the early days of Tuchel at the club.

We also expect chances of seeing Reece James in the center back role partnering with Thiago Silva and Rudiger.