3 Similarities between Xavi and Guardiola when they became Barcelona managers

By Brownzy_Writer (self media writer) | 2 months ago

Barcelona is one of the most recognizable brands in sports, and coaching the squad is always a honour for any manager. The club hires several elite managers from around the world to handle the team, but they occasionally delegate responsibilities to former players. 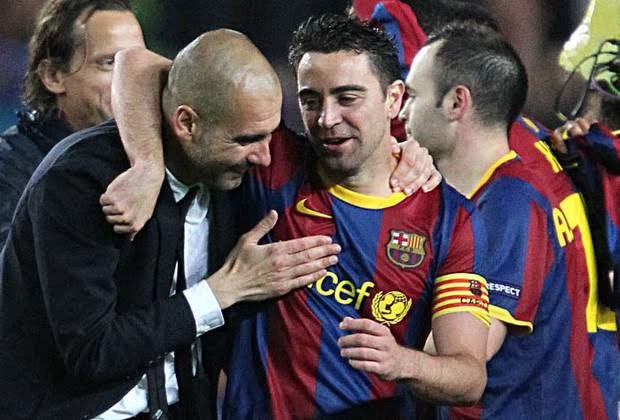 Guardiola is one of the most successful managers in the game's history, having begun his coaching career in Barcelona. Many Barcelona fans want Xavi to have a successful spell like Pep, and there are already parallels between the two coaches.

Despite winning seven trophies at Ala Sadd, Xavi has no coaching experience in Europe. This was Pep Guardiola's predicament when he took over at Barcelona in 2008. Pep went on to demonstrate that experience may not be necessary and that Xavi might do the same, which he has already begun in Qatar.

2. Former members of the club's foundation.

Guardiola played for Barcelona for 17 years, while Xavi played for the club for 24. One of the reasons managers struggle at Barcelona is that they do not comprehend the club's structure and style; former players typically have an advantage.

Playing for a few years in Barcelona is insufficient; spending almost a decade is sufficient to grasp how the club operates, which is an advantage Xavi and Guardiola enjoy.

3. The appointment of Laporta.

One of the factors that contribute to managers' success under Laporta is his unwavering backing. Nobody could have predicted Ronaldinho and Eto'o leaving Barcelona, but it happened because the coach had the president's support.

Some have inquired about the return of Alves and Puyol, and Laporta's response has been that it all rests on Xavi; this is a display of complete support.