By Nanayaw01 (self media writer) | 8 months ago 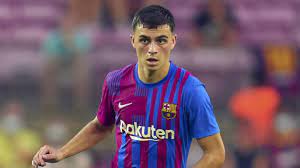 Pedro Gonzalez Lopez is a Spanish footballer who plays for Fc Barcelona and has already won the heart of the club's supporters though he is young. Pedri was born on 25th November 2002). This young star is popularly known by many as Pedri though his real name being Pedro. On the field of play, he is a midfielder and also among the young midfielders in the Barcelona squad currently.

He has been one of the key players for the club since he arrived from UD Las Palmas on 20 August 2020. His creativity and vision on the pitch earned him his first call up to the Spanish National team.

Now Pedri is considered as a great and perfect player for Fc Barcelona and the Spanish National team.

His great form at Fc Barcelona got him the chance to play in the Olympics Games, UEFA Nations League, and many more. He played with it wholeheartedly. His effort made the Spanish National team reach the finals of the UEFA Nations League but eventually lost to France.

Pedri and Barcelona have now reached an agreement to extend their contract until June 2026 with a buy-out clause of 1 billion euros.

Check some photos of Sons of Adjetey Anan, Van Vicker and Jacky Appiah.

I Didn't Like Messi, I Knocked Him With My Knee But Messi A Good Player- Black Stars Defender Says