By Obeng_News (self media writer) | 3 months ago

A renowned and award-winning journalist, Captain Smart has revealed deep secrets in the Black Stars camp while they were playing the AFCON 2021 tournament in Cameroon. The journalist suggests these secrets which were left unattended, brought about the embracing exit of the Stars from the tournament.

The Black Stars were eliminated from the AFCON 2021 tournament when they failed to qualify from the group stages with just one point. The embarrassing exit has been a national conversation in the whole of Ghana on both political, sporting, or any other shows in the media.

The morning show host of Onua Maakye on Onua TV/Radio, Captain Smart, today, took time to unveil all the deep secrets that occurred at the camp.

According to Captain Smart, during the 2021 AFCON tournament, Thomas Partey told the technical team that one of the senior players have brought his 'Mallam' or Priest to the Stars camp. Smart also added that when Partey made that concern to the technical team, no attention was given to that particular claim by the assistant captain, Thomas Partey. 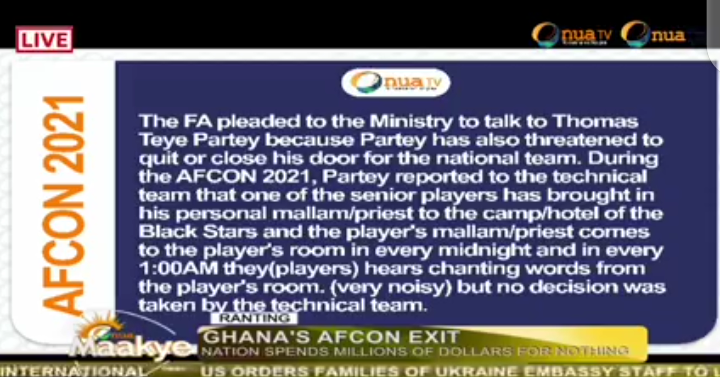 Again, Captain Smart revealed that the Black Stars players were not prepared for this tournament and that resulted in their inability to qualify for the subsequent rounds of the competition.

"The players were never prepared for the competition and so they could not be paired for the subsequent stages in the competition. That was because they were interested in money" Captain Smart revealed today on his Onua Maakye Show.

Moreover, he also revealed that some players who couldn't join the Stars at the tournament told the Football Association that they won't be able to join because of the presence of black power (Juju) at the Stars camp. He said the players are Inaki Williams, Alfred Duncan, Mohammed Salisu, and Brain Brobbey.

The award-winning journalist also revealed on his show that, before Fatawu Issahaku started the Comoros game, it took the GFA President to put pressure on the Coach to start him. 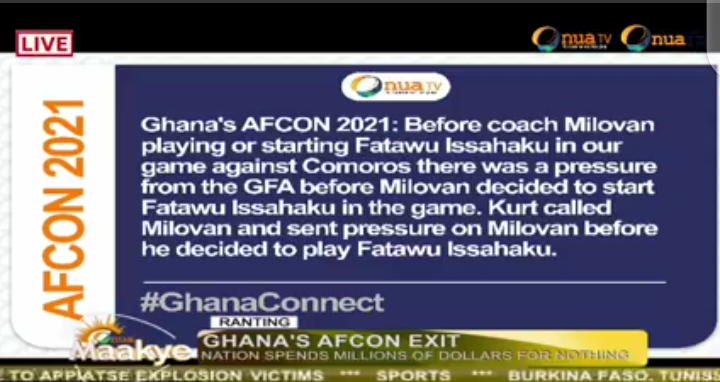 What is your take on the claims of Captain Smart??

In your estimation, what do you think contributed to the Stars exit from the AFCON 2021??

Should GFA President be sacked for all the things that happened at the Black Stars camp??

You can leave your thoughts and comments on this article below.