By fiifi_koomson (self media writer) | 8 months ago

In search of a promising striker to replace Sergio Aguero, who left last summer, Manchester City have recruited River Plate striker Julian Alvarez. The young Argentinian talent, who has signed up until 2027, will join the English club at the end of the season, next December at the latest. 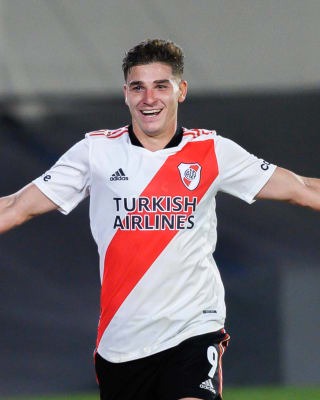 Living legend of Manchester City, Sergio Aguero, who retired due to heart problems after only a few months at FC Barcelona, ​​knows the name of his worthy successor. Indeed, the English club announced on Monday the recruitment of Julian Alvarez (21 years old). Considered one of the greatest hopes of Argentine football, the striker, tracked by Fiorentina, Atalanta, Naples or Nice, has agreed to join the English champion, who has lifted his release clause, set at 21 million euros. The young Argentinian signed a contract for five and a half years, until June 2027, with the English Champions.

Winner of the Copa America last summer in Brazil, Alvarez has exploded in recent months with River Plate. The 1.70m center forward is the current top scorer in the Argentine championship with 18 goals scored in 25 games, but he also shines with his passing skills since he has already delivered 9 assists; a profile that fits perfectly with the game advocated by Pep Guardiola.

However, before being able to count on his rookie, the Spanish manager will have to wait. For good reason, Alvarez will not land until June, since Manchester City has agreed to leave him on loan until the end of the season, a temporary transfer which could last until next December in order to let the South American compete in the next Copa Libertadores.

Content created and supplied by: fiifi_koomson (via Opera News )

22/23 UEFA Europa Team of the Week After Round 3: Marcus Rashford Leads Attack; Holding in Defence

These Are The Players With Most Career Free Kick Goals.