By Obviousaint (self meida writer) | 1 months

A video has emerged of Cristiano Ronaldo's seven supercars being moved out of his garage in Turin. According to Per Sempre Calcio, the ones who published the footage, the vehicles are being transported by a Lisbon-based company. 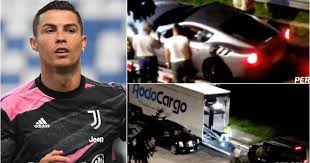 Meanwhile, it's been reported earlier that Ronaldo had bought a penthouse in Portugal's capital and was planning to move back to his childhood club Sporting CP. However, the information was later disproved by the 36-year-old's agent Jorge Mendes.

Nonetheless, the reports that Cristiano could leave Juventus at the end of the season are very much alive, with his side at risk of missing out on Champions League football for the next season.

Juventus are currently 5th on serie A with 75 points with a win could not garantee them with Champions League football unless Napoli or AC Milan drop points. And there is a speculation that Ronaldo might leave the club if they failed to qualify for Champions League this season.

Content created and supplied by: Obviousaint (via Opera News )