By GoldenAgedAvakin (self meida writer) | 19 days

This article is about Ngolo Kanté and his career achievements. 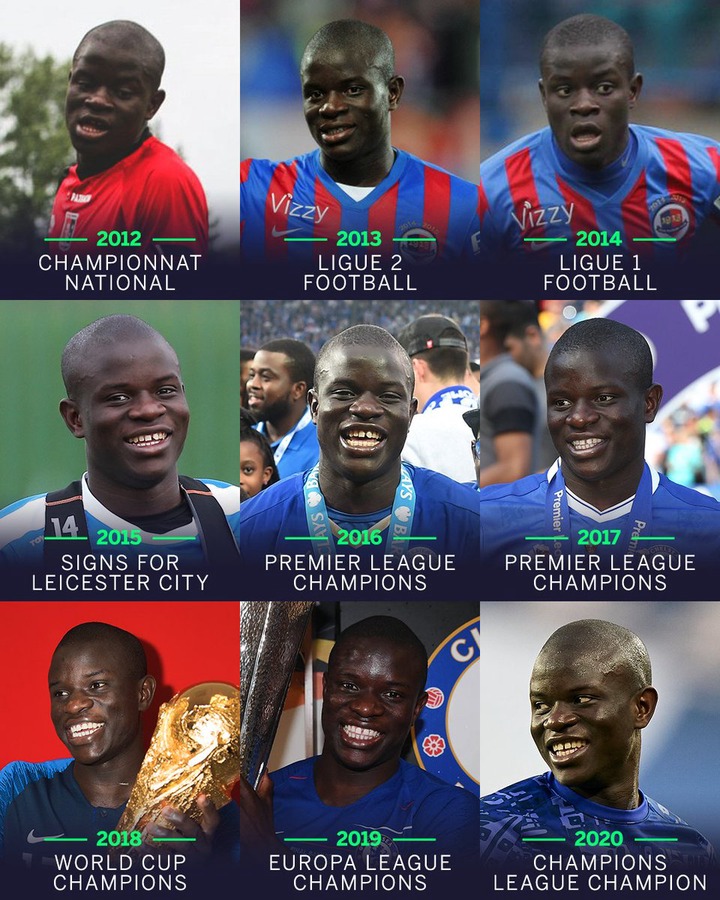 Ngolo Kanté is a footballer that is loved by all in the world.You just have to admire his talent as he possess the ball. He is also known and respected for his humility and hard work.

Kanté made his senior professional debut with Boulogne in 2012, appearing as a substitute in one Ligue 2 match, and played an entire season in the third division the following year. After that he joined League 2 side Caen on a free transfer, finished third and won promotion to Ligue 1. He stayed with the club for one more year.

In 2015, he joined Leicester City for a fee worth £5.6 million and became an integral member of the club's first Premier League title. He was named Leicester City's Player of the Year in his first, and only, season at the club. The following year, he joined Chelsea for a fee worth £32 million and won the league; making him the first outfield player to win back-to-back English league titles with different clubs since Eric Cantona in 1992 and 1993.He has also won the PFA Players' Player of the Year and FWA Footballer of the Year award, and established himself as one of the best midfielders in the world during his time at the club, going on to win the FA Cup during his second season and the UEFA Europa League during his third.

Kanté made his senior international debut for France in 2016 and was included in the squad that finished runners-up at the 2016 European Championship. In 2017 Kanté was named the French Player of the Year, a first for a player from the Premier League in seven years, and 12 months later was a key member of the 2018 FIFA World Cup winning squad.