Lineups of the Elche-FC Barcelona of LaLiga 2020-21 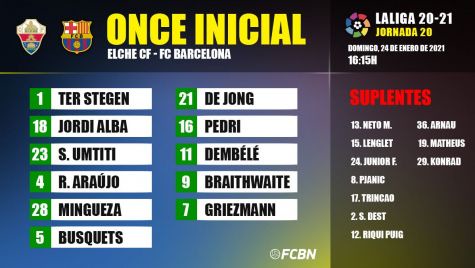 Ronald Koeman has already revealed the line-up with which FC Barcelona will face Elche CF at the Martínez Valero. This is the XI of Barça: Ter Stegen; Mingueza, Umtiti, Araújo, Jordi Alba; Busquets, De Jong, Pedri; Griezmann, Dembélé and Braithwaite.

FC Barcelona will face Elche CF at the Martínez Valero on Sunday, January 24, on the occasion of a twentieth day of LaLiga Santander 2020-21 with which the Catalans will seek to close a week with two wins . The team led by Ronald Koeman overcame the Copa del Rey round of 32 tie against Cornellá in extra time (0-2), and now wants to add the fourth straight victory in LaLiga against an Elche in danger of relegation.

Barça, in this sense, will have a golden opportunity ahead that they cannot miss to continue adding in the League , and incidentally recover a third place in the championship that Sevilla snatched from them on Saturday with their defeat against Cádiz (3-0 ). While it is true that Barça has been very irregular so far this year , this Sunday Koeman will once again present a competitive line-up to take the three points.

The Blaugrana team knows that a victory will help them prepare on a mental level for the next matches , especially for the round of 16 of the Copa del Rey against Rayo Vallecano. Despite the absences of Coutinho, Piqué, Sergi Roberto and Ansu Fati , in addition to Messi due to suspension, Barça will set up an eleven of guarantees in which the attack will be made up of Braithwaite, Griezmann and Dembélé, in 4-3-3 .

The main thing will be to ensure the victory, but Barcelona does not want to take their foot off the gas and hope to achieve a victory as bulky as possible that can convince their followers , thus promoting the continuity of the good streak in the domestic championship. In the second half changes are expected that will depend on how the game goes, in order to keep the legs fresh from the heavyweights.

The eleven of the Barça recovers to several habitual 'holders' of the last parties , although with slight changes. In the defensive line, Mingueza will return to the title in the right side, with Umtiti and Araújo in the axis of the defense and Jordi Alba in the left side. Busquets, Pedri and De Jong will complete a center of the field of containment and creation, while the forward will be composed as we have already advanced by Braithwaite, Griezmann and Dembélé .

The Elche CF , meanwhile, will play in their stadium with the ambition to create difficulties from the start and the clear desire to score some points that will allow up positions in the table . Those of Jorge Almirón will not renounce anything and will capture an intense rhythm in all areas of the field, especially in pressure and withdrawal. Barça will have to monitor transitions and set pieces.