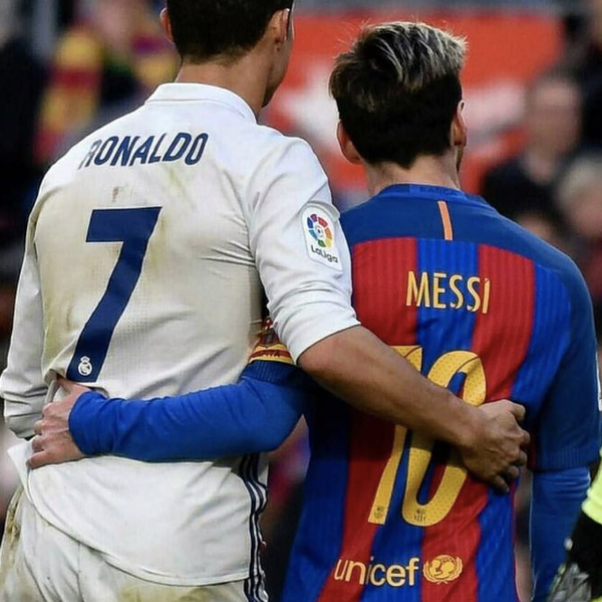 I am the most new football fan among all the people answering this question. A couple of years back, I casually asked one of my very close friends, whom I used to consider a football fan - Hey who is better? Ronaldo or Messi? He thought for few seconds and answered Ronaldo and gave me a reason that Ronaldo is a more complete player. So whenever I used to meet my friends or relatives and then this unending debate comes up who is better between the two, I used to tell the exact same thing - Ronaldo, he is a more complete player. The truth was that I didn’t know name of any other footballer apart from Messi or Ronaldo, not even Neymar. The only other footballer I knew at that time was Sunil Chetri, Indian Football captain. I have never seen a football match ever before. My younger brother has been following football from a long time. He asked me whom do I admire most - Messi or Ronaldo? I answered the same - Ronaldo. He asked me since when I am following football? I told I haven’t seen even a single match. He smiled and told me watch these two play, watch their matches, your opinions will surely change.

It was World Cup 2018. I went to my native at that time. Ronaldo scored a genius hat-trick against Spain. I told my brother see how any one can be better than this great guy? He told Ronaldo is a great player. He has done this before as well and he will do the same in future also, but Messi is something else. Messi has missed a penalty against Iceland in the World Cup. I told what a crap player, he can’t even score a penalty. My brother just smiled and didn’t say anything. I came back to Bangalore, back to my hostel. There was this do or die match for Argentina against Nigeria. Suddenly, Messi scored a goal, a goal which left me speechless. The commentator told ‘This is what great players do, they chose their moment’. I was blown away, I was lost for adjectives. That was the moment I became which I was destined to be - a football fan, a Messi fan.

Now such is my addiction of football that I know almost every player playing in Premier League, La Liga and other teams such as PSG, Juventus, Inter Milan, Bayern Munich and many others. I have watched tons and tons of videos, researched a lot about football and blah blah. I am really at the same level as any other normal football fan would have been. Now I also play football way better than I used to. I pray that my addiction for football should go away.

Messi and Ronaldo are two supreme players of not only this generation, but of all time. But they are completely different players -

Ronaldo is a more of a goal scorer now a days. He has become more of a one touch player. He used to be a very good winger but was nowhere near the level of Messi. No body is more threatening inside the box than Ronaldo. He is the best in the world when it comes to headers. But Messi scores the same number of goals as well. Moreover, currently he holds the most number of European Golden Shoe - 5. So both Messi and Ronaldo comes are at the same level as a goal scorer. Ronaldo’s strength inside the box is his power, his aerial threat, his strong wrong foot whereas Messi’s strength is his accuracy. Messi’s precision is a match to none.

Messi’s vision is the best in history. Nobody see things which Messi does. He is a genius when it comes to providing assists. He is a genius attacking midfielder. The way he create chances for his teammates, the way he dictates the game, it is a fact not an opinion that Messi is the BEST in history in this aspect of the game. No Ronaldo fan should dare to argue here. Messi’s understanding of the game, his vision, his dribbling, his accuracy, his playing abilities outside the box - Messi is one of his kind. A gift for us. I am not going to discuss Ronaldo here at all.

Somewhere I feel Ronaldo is a better big game player than Messi.

Since Ronaldo’s move to Juventus, many have started to tell that Ronaldo has proved himself by playing in different leagues - Portugal, England, Spain and now Italy. But when I listened Messi saying his dream is to finish his career with Barcelona (and even Barcelona is currently working on a new contract for Messi which will allow Messi to be at Barcelona beyond 2021). My happiness knew no boundary when I heard this from Messi. I can easily bet - a loyal Messi fan will be more delighted to this Messi’s dream of finishing his career at Barcelona than a loyal Barcelona fan. I can fight with this world over the opinion that playing in multiple leagues makes you a better footballer than playing in one league all your life (except if the league is France’s damn boring Ligue 1, I am talking about only top 5 European leagues). Loyalty has been a factor which is endangered among humans. Moreover, Ronaldo has played at Manchester United, Real Madrid and Juventus, he has always been surrounded by great players who guarantee him of providing enough chances inside the box, which has been the biggest strength of Ronaldo.

Messi has never won anything (except Under 19 World Cup) with Argentina, whereas Ronaldo has won Euro 2016 with Portugal. I don’t know it was Messi’s inability to win in tremendous pressure or he has been seriously unlucky, but I feel even Ronaldo doesn’t guarantee winning a title for this shit unorganized Argentina football team. Messi has been part of 4 finals, this itself is not easy. But people will say Ronaldo has edge over Messi on this point and they have the right to say so.

I can write and write ,but my answer is already too long. If anyone say I am a blind Messi fan, the I will say I AM PROUD TO BE A BLIND MESSI FAN. FOOTBALL MEANS NOTHING TO ME , SPORTS MEANS NOTHING TO ME, IF IT IS NOT FOR LIONEL MESSI.

PS - Coming back to where I started, I went back to my close friend who told me Ronaldo is better than Messi and told him what a crap opinion he has. He told me “Ohhh Aamir! Ronaldo was the Ballon d’or, he himself say he is the Greatest of all time and the most complete player ever, so I told you that Ronaldo is better. I watch football but I am more of Manchester United fan and watch their matches only”.