These are the top-rated players on Wednesday night Champions League according to stats on sofa-score.

Stats: Madrid won on a low margin against Inter Milan in their first champions league game and Courtois was instrumental in this win as he made five(5) saves all from the box, one(1) punch, one(1) clearance, and 86.7% pass accuracy.

Stats: Christiano plays as left-back for sheriff and he was excellent at it against Shaktar Donetsk as he bags two assists, made four(4) clearances, five(5) successful tackles, 84.2% accurate passes, and created a big chance.

Stats: Dulanto rated at 8.0 against a solid team like Shakhtar Donetsk means he did well. He made seven(7) clearances, blocked two(2) shots, three(3) successful tackles, and 77.4% pass accuracy.

Stats: Madrid had a very tough game against Inter Milan but later managed to score at the last minute. One of the players who stood out aside from Courtois was Militao, he made four(4) clearances, blocked three(3) shots, and successful tackles of four(4).

Stats: Grealish was on display against Leipzig today as he scored one(1), made an assist, had two(2) shots on target, 84% accurate passes, and was fouled three(3) times.

Stats: The 18years old player was very impressive today as he scored and assisted against Bestikats on a 2-1 win. He had two shots on target, created one(1) big chance, pass accuracy of 85.3% and he was rated above all players on the field.

Stats: Leipzig lost to Manchester City by 6 goals to three(6-3) but one player who had a standout performance among all the players on the field was Nkunku. He had three(3) shots on target which all resulted in goals, made 88.9% accurate passes, and was fouled once.

A very solid performance against a tough team.

Stats: Sheriff Tiraspol made a shocking win against Shakhtar Donetsk and Adama Traore played a role in it. He had four(4) shots which lead one(1) into a goal, made three(3) successful dribbles, four(4) tackles, and one(1) clearance.

Stats: Haller bag four(4) goals to his name against Sporting CP, which is the most scored by any player in a single match in this season's Champions League. He had four(4) shots on target, 78.3% accurate passes, and one(1) successful dribble.

Stats: Haller's teammate Antony also had a classic performance against Sporting CP. He assisted twice(2), had three(3) shots on target, fouled twice(2), and made 70.0% accurate passes. 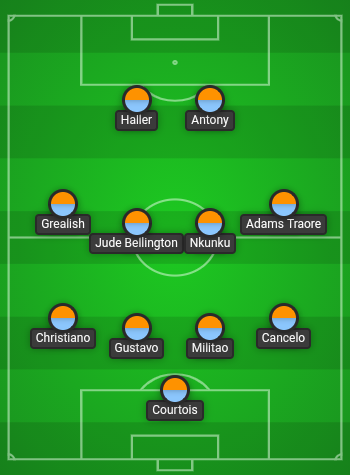