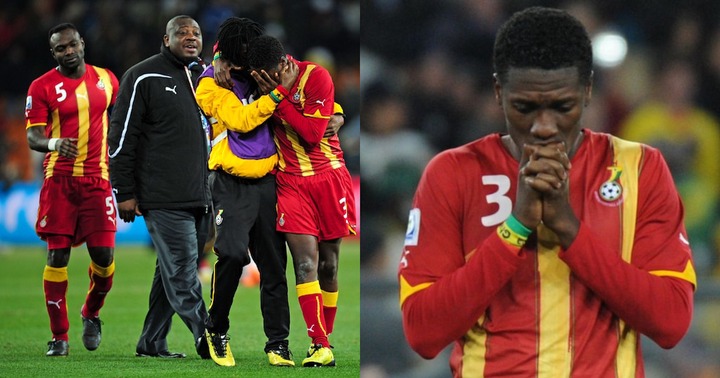 Former BlackStars captain Asamoah Gyan has come out to openly declare his intentions to play for Ghana national team in the World Cup at Qatar later this year.

The former Legon Cities player was part of the 2010 World Cup squad that was on the verge of making history as they met Uruguay in the quarter finals of the world cup that year. After Luis Suarez handled a goal bound ball to prevent a last minute goal, Asamoah Gyan stepped up to take a penalty that would haunt him to this date. He missed the penalty and eventually Ghana lost on penalties to Uruguay.

After being drawn to the same group in the World Cup this year, the revenge talk has been on.  With Asamoah Gyan declaring his intentions and videos circulating with him taking intense training sessions, it could be said that the striker would want to be part of the team for the World Cup.

However, he is not the player he was anymore and his services will provide very little to the team at this moment. It is true that the team may lack world cup experience with many of these players coming into the team post 2014 but football these days is not played on an experience basis but rather technical abilities and pace.

Also Ghana now has very skillful and pacey players in the areas that Asamoah Gyan can play. His selection will only hamper the development of one of the young ones who would have been selected in his place.

Ghana will face Uruguay in their last group game of the tournament and this could be a potential decider for the knockout stages. Revenge should be the only thing on the minds of the players and the technical team for the world cup. However, the truth will always be that Asamoah Gyan’s days with the Black Stars are over; it’s time for a new hero to shine the Black Star.