Blackstars manager, Charles Kwabena Akunnor was relieved of his managerial duties yesterday following the poor run of result of the blackstars since taking the job. There had been prior calls by Ghanaians on the Ghana Football Association to effect this change and the announcement didn't come as a surprise. After eleven games of which five resulted in defeats, four wins and two draws, it was quite explicit his sack was inevitable and it eventually happened yesterday.

Meanwhile the likes Herve Renard and Otto Addo have been mentioned among several other potential mangers to replace CK Akunnor and report says the GFA have began their search for a new coach. However some Ghanaians have refused to apportion the entire blame of blackstars woes on CK Akunnor and one of them is the Member of Parliament for Ningo-Prampram, Sam Nartey George, who believes the sacking of CK Akunnor is not the ultimate panacea to the blackstars shambles. The MP opined that, the football hierarchy must focus on building a solid fulcrum by grooming young prospects to feed the blackstars with talents and until that is done, all resources invested in the blackstars will go waste. Take a look at Sam George's opinion about CK Akunnor's sacking. 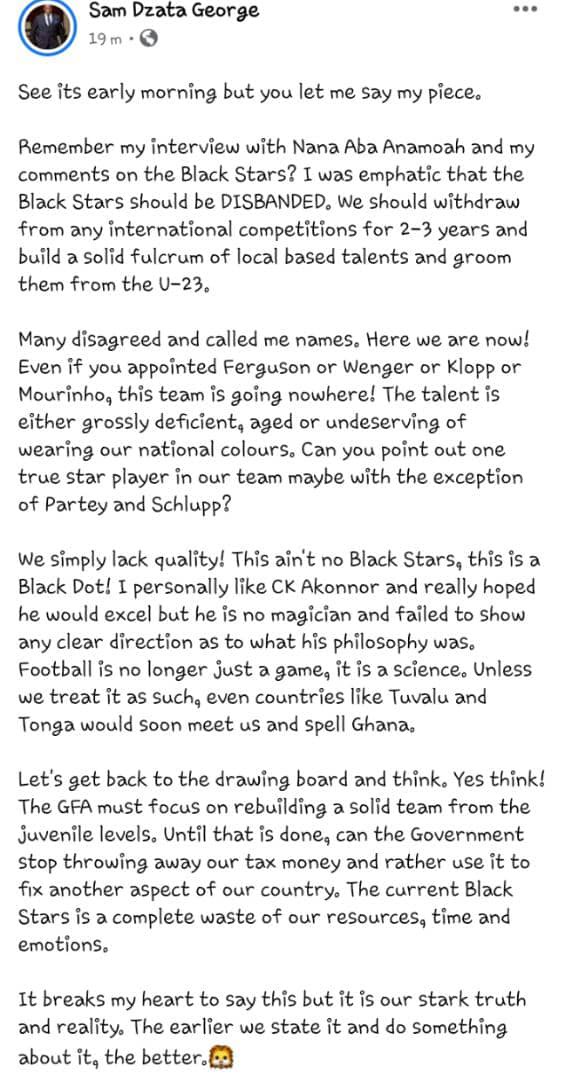 The MP's opinion should be piece for reference to the GFA in their quest to remedy the national team's bewilderment. Football in Europe, Americas, Asia and even some part of Africa like Egypt, Algeria and Senegal is clearly on the upturn, owing to their focus on grassroot football which makes talents readily available to the national team, and it is about time Ghana adopt similar strategy to catch up with the new evolvement in the game.