By Kemicalz (self meida writer) | 19 days 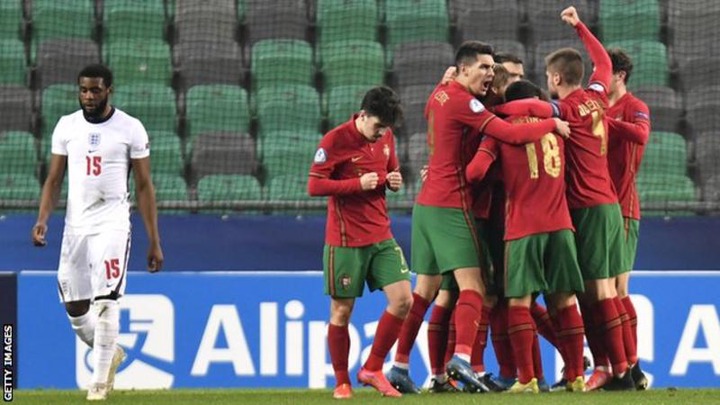 England's chances of reaching the Euro Under-21 Championship quarter-finals hang by a thread following a limp display and defeat by Portugal.

Having lost to Switzerland in their opening game, England were second best, failing to have a shot on target.

Dany Mota's low, angled shot and Francisco Trincao's penalty decided the game in the second half in Ljubljana.

England must now beat Croatia and hope Portugal defeat Switzerland to have any chance of progressing from Group D.

Even if England and Portugal win then it would come down to a three-way, head-to-head between England, Croatia and Switzerland for one place, likely settled by goal difference. Croatia beat Switzerland 3-2 on Sunday.

The warning signs were there for England as early as the third minute on Sunday when Ben Godfrey was forced to head away a Mota effort from his own goal line.

England failed to heed them or, to be more accurate, were largely powerless to do anything about it against a far superior opponent.

Everton defender Godfrey had to perform a similar last-ditch salvage job later in the first half, again denying Mota with a sliding tackle at the near post as Aidy Boothroyd's side struggled to preserve parity before the break.

With Fabio Vieira and Vitinha both firing just wide from range as the traffic continued to pour one way, it was only a matter of time before the deadlock was broken.

Mota was the one to do it, collecting a neat pass Pedro Goncalves inside the box before slotting his shot just inside the far post.

Trincao put the game beyond England from the spot after Marc Guehi's stuck in a boot and caught substitute Goncalo Ramos in the box.

Qualification will also be beyond them unless they produce a markedly improved performance against Croatia on Wednesday.

'It is still possible and we will fight to the end'

England U21 boss Aidy Boothroyd, speaking to Sky Sports: "It is deeply disappointing. You've got to give credit to the opponent. They're a very good team and we got them on a good day.

"We didn't create anywhere near enough. Considering the goals we scored leading up to this, it was a real strength of this group. Creating chances and scoring is a big part of what we are so it is really disappointing, and something we need to rectify before the last game.

"We intended to take the game to Portugal. In the first half we stuck to game plan - we wanted to be in the game at half-time. That's not a penalty in my view. We're not going to give excuses. Now it's about picking them up and going again.

"It is still mathematically possible and we'll fight to the end. We've come here to play three games and we intend to. We wanted to go into the final game with it still in our hands and it's not."