9 Of The Most Expensive Houses Of Football Players In 2021

By KkCabobo (self media writer) | 1 year ago

9 Of The Most Expensive Houses Of Football Players in 2021 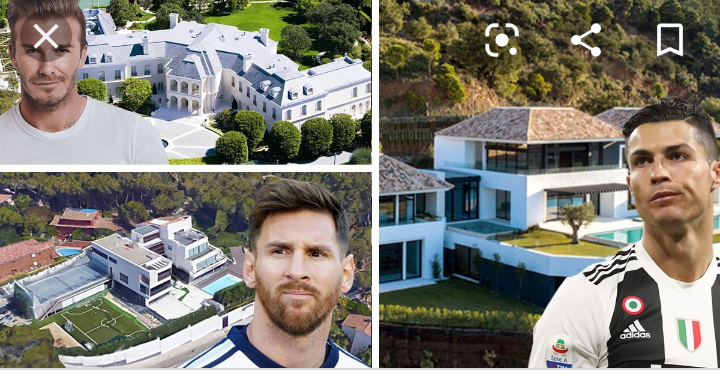 We all know that football players earn a fair share of money, but what are 9 of the most expensive houses that footballing stars live in? We found out.

Probably the most popular footballer in the world in the late 90s and early 2000s, David Beckham’s fame has never quite been matched by any other footballer. The Englishman has been all over the world, from his rise in Manchester, to the height of stardom in Spain with Real Madrid; he has also played for AC Milan in Italy and LA Galaxy in the USA, before hanging up his boots in France with Paris Saint-Germain. During his travels Golden Ballshas amassed a selection of property well worth over £62 million!

Beckham’s Miami apartment has a great view of the bay.

Beckham’s Cotswold getaway was formerly a farmhouse that has been converted to a luxurious country house.

Far from the madding crowd: David loves the countryside, and it suits him to a tee.

After his departure from Manchester United, David Beckham moved to Spain to play for Real Madrid. His years in the Spanish capital was spent in this luxurious 5-bedroom villa.

Beckham’s move to Hollywood, USA saw him indulge in a Great Gatsby-esque mansion.

Beckham played out the last of his footballing days in France, where he splashed out on an exquisite 19th century Château in the south of France.

These days the Beckhams live in their 7-bedroom manor in Holland Park.

Cooking up a storm in a state of the art kitchen.

Cristiano Ronaldo is an icon of the game, a five times Ballon d’Or and UEFA Champions League winner. The Portuguese legend is a juggernaut of a goalscorer; CR7 has scored wherever has played, and he’s owned some mighty fancy houses along the way!

Ronaldo left Real Madrid for Juventus in the summer of 2018.

Training the brain: Father and son keep their minds razor sharp studying in the spacious lounge

A major part of Ronaldo’s success is attributed to his fitness. The Portuguese has installed a state of the art training facility in his home.

The luxurious villa in the coastal town of Marbella provides the perfect escape for one the world’s most recognizable face.

The sunlit skies reveal stunning architecture from ground to ceiling.

Picture perfect: A bedroom with a view.

Paradise: Cristiano Ronaldo spent a lot of time with family while isolating during the 2020 COVID19 pandemic.

Leo Messi might be the greatest footballer of all time, but everything else about him is astonishingly down to earth for a man of his stature. The great Argentine lives with his wife Antonella, and their kids Thiago and Mateo in their humble abode in the heart of the Catalan nation.

A humble castle: This spacious home bodes an outdoor swimming pool, and enough green for the king to do what he does best.

Messi takes his sons Thiago and Mateo for a kick about.

Basking in the Spanish sunshine: A beautiful home for a beautiful family.

Brazil’s golden-boy Neymar is a rockstar. He loves to party and dance both on and off the field. It is as the Brazilian’s call it the Joga Bonito spirit. The forward surrounds himself with friends, family, and his loyal parcas, keeping them all tied up in a pleasure house(s)!

Following his world record fee move to Paris Saint-Germain, the Brazilian superstar and his band of brothers have been living the life in a posh manor house in the heart of Paris. According to our sources, it’s just wild in there!

Neymar has built himself a haven in his hometown of Rio. It comes fully equipped with everything you can imagine, from indoor and outdoor swimming pools to a tennis court, and a movie theatre as well!

The usual suspects: King Neymar and his parcas have themselves a swell time in the footballer’s Rio home.

Football isn’t the only sport Neymar Jr. is adapt at.

French superstar Paul Pogba sent the world into a frenzy with his big money move from Juventus to English giants Manchester United. Since then the Frenchman has blown hot and cold on the field, but his game off the field has been solid.

The France international lives in this modern establishment in Hale Barns.

The property provides a perfect balance of nature and present-day architecture.

The Manchester home comes fit with an indoor pool for the Frenchman to relax his muscles after intense workout sessions.

The master bedroom is one of five richly cushioned rooms in the house designed to provide Pogba, his family, and guests with the outmost comfort of home.

The enigmatic midfielder loves to play foosball and snooker. Pogba often provides his fans with glimpses of his games room on his social media accounts.

The Polish goal machine was voted the best player in the world in 2020 after he fired Bayern Munich to a historic treble of German Bundesliga, DFB-Pokal and the UEFA Champions League. After a season of gruelling hard work and unrivalled dedication, see where Lewa enjoys the fruits of his labour.

Robert Lewandowski enjoys somewhat of a movie-star fame in his homeland and resides inside of his heavenly mansion, neatly tucked away in the countryside.

Merry Christmas: Robert and Anna Lewandowski spend their holidays in Poland with their kids Klara and Laura.

Lewandowski’s dedication to excellence remains unmatched; not one to rest on his laurels, the Pole has training equipments all over his estate.

The gorgeous two-storey, four-bedroom house was built by renowned architect Joaquin Torres and sits on a massive 16,000 square feet of land.

Lots of space for a picnic or two: Although his move to Spain marked the end of his dominance on the field, off the field, the brilliant Brazilian enjoyed a blissful life with friends and family.

England and Manchester United’s record goalscorer has invested in some spectacular properties all around the globe. It looks like goals aren’t the only thing Wazza is adapt at scoring.

Just like heaven: You too can live in Rooney’s sprawling villa in Barbados for £25,000 per week.

Dine in a sumptuous outdoor verandah, enjoy hearty meals and watch as the sun goes down in the scenic Jasmine Ridge horizon.

The paradise pad boasts its own golf course, a cinema, and an infinity pool which stretches out into the lush blue ocean surrounding the island.

Dubbed “Wayne Manor,” Bruce Wayne certainly doesn’t have anything on Wayne Rooney! Well, maybe the Batcave, but Rooney’s multi-million pound mansion in Prestbury comes with everything else. Half a dozen ensuite bedrooms, a swimming pool, a salon, and even it’s own park, which rumour has it has underground heating capabilities!

In 2018 Wazza moved the capital of the United States of America to play for D.C. United. Just outside of Washington, he splashed out on this multi-storeyed residence in Wesley Heights. Among many other amenities it came with a splendid wine cellar. Now that’s something even Alex Ferguson would’ve been proud of!

The King of Stamford Bridge has built himself a castle in his native land. The $21 million mansion sits 8,600 square feet of land and has everything Big Drogs could ever wish for, including a personalized trophy room to herald his achievements.