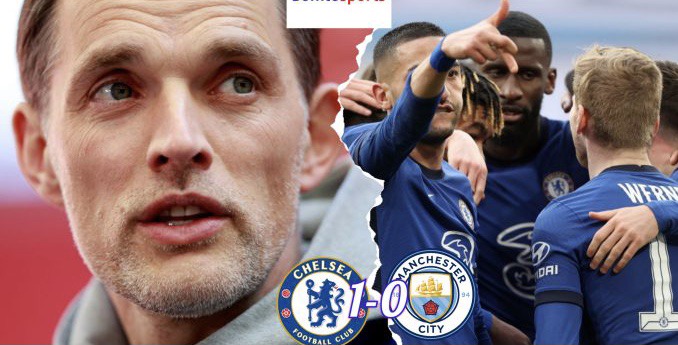 having two of their goals ruled offside, still managed to pace through Manchester City into the finals of the FA Cup.

After a first attempt was ruled offside when Timo Werner and Hakim Ziyech linked up for a sensational early goal, Chelsea managed to materialize similar opportunity again.

But this time it was Mason Mount’s ball finding Timo Werner who then pushed forward before cutting the ball into the box for a master finish off from Hakim Ziyech.

Ziyech and Werner came on the starting 11 to replace Christian Pulisic and Kai Havertz in Tuchel’s preferred three man front.

The duo alongside Havertz have seem to be gradually finding their feet at Stanford Bridge since the arrival of Thomas Tuchel.

Speaking after the game, Thomas Tuchel made recognition of his boys performance against their League leaders.

‘We played an excellent 35 minutes in the first half. We had to suffer for 10 minutes.

‘We then played another 30 minutes so strong and got the lead, could have got another. It was a very strong performance and I am very proud of my team. Very happy they performed to this level today.’

The two guys [Ziyech and Werner] were very, very good upfront with the speed and acceleration – and the impact that Mason [had] with the pass,’ the 47-year-old added.

‘Timo and Hakim, it was the same lineup like against Liverpool where they were also very, very strong in an away game in a 1-0 victory.

‘Everybody who is on the pitch needs to perform, now is the moment in the season where we cannot drop one per cent and that’s the way we want it.’

Chelsea will face off with either Southampton or Leicester City on May’s FA Cup final day.