By Raysportz (self media writer) | 7 months ago

For sometime now football is gradually becoming one of the richest sporting activities in the world. Alot of investments are coming it's way. From the year 2000 till now, the amount of money used by football clubs per year is gradually increasing as football players increases their salaries and also staff members. 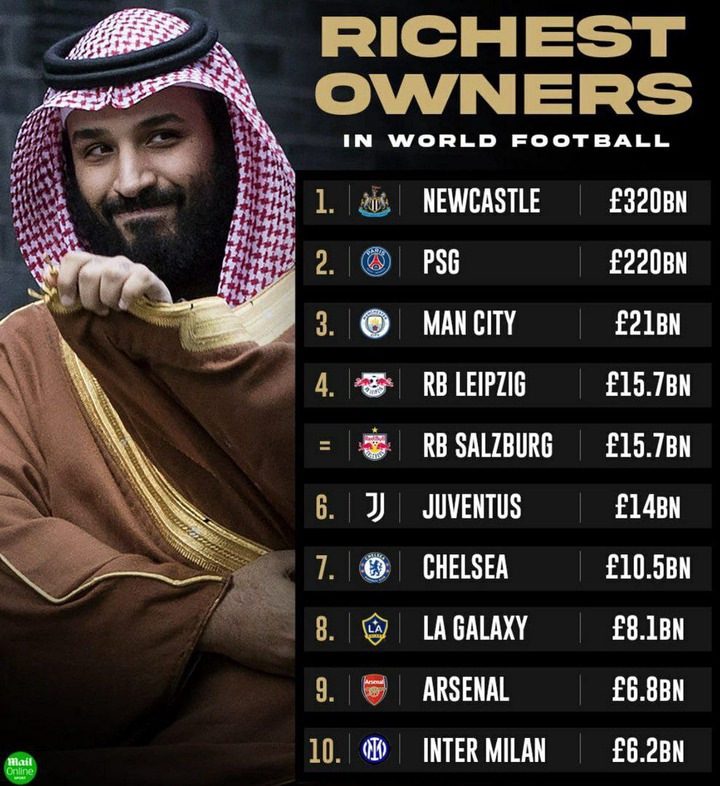 Rich men are now focusing on increasing their wealth through football by purchasing a club or owning a percentage of shares of the club. The England based clubbed Newcastle United was bought recently the a rich Saudi Arabian and now the football fans are keeping an eye on the team as they see them to be an incoming 'PSG'. The purchase of this club has ensured that the club is going to be part of the big clubs in England and compete for European spots ones again. Teams like Tottenham Hotspur, Arsenal and Leicester city are at risk of losing their spot on the league table to Newcastle United.

After the confirmation of the change of owners of Newcastle United, the club has risen to first of the most richest clubs in the world surpassing Manchester city, Barcelona, Bayern Munich, Real Madrid and Paris st German (PSG). The new owner of Newcastle United worth £320BN which is far greater than anyone football owner in the world of football. He is £100BN richer than the owner of PSG which is mind blowing. Manchester city owner falls at third place with just £21BN (comparing with the first two). One of the greatest football owners is the Red Bull's. They have invested a whole lot in sports particularly in football as they own clubs in USA, Germany and other countries.

Surprisingly Juventus owner is more richer than the famous Roman Abramovich of Chelsea. La Galaxy, Arsenal and Inter Milan owners are also seen as part of the top 10 richest owners.