Top 10 most valuable Football club brands in the world 2021

By MrAbooky (self meida writer) | 1 months

Football served as a source of entertainment for many people in the world. Although we have several football clubs in the world and fans supporting various clubs around the globe, you might have been wondering the the value brand of those teams and in this article we will be looking at the top ten most valuable football club brands in the world 2021.

First on the list is the Spanish Laliga giants Real Madrid with €1,276 million. Real Madrid though suffered a 10% value brand decline,they remains the most valuable football club brands for three consecutive years. The bitter rivals Barcelona of Real Madrid falls on the second position on the list of most valuable football club brands this year with a brand value of €1,266 million. Barcelona also suffered a 10% decrease in brand value this year.

Liverpool came sixth in the ranking with a 23% decrease in brand value. They have a brand value of €937 million.

Are you happy with the ranking ?

What is the position of your team ? 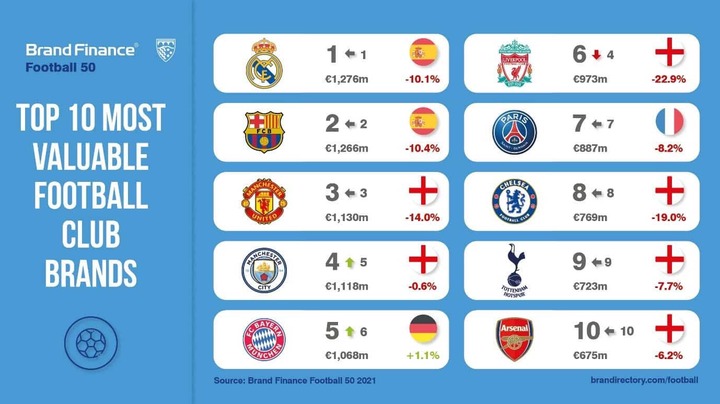